The One Wiki to Rule Them All
Register
Don't have an account?
Sign In
Advertisement
in: Non-Canon Articles, Non-canonical characters, Non-canonical villains,
and 6 more
English

Yazneg was a character in (and created specifically for) Peter Jackson's The Hobbit film series. He was a fierce Orc captain and Warg-rider. In the film he is the right hand and second-in-command to Azog the Defiler, leading his Hunter Orcs after Thorin Oakenshield and his band of Dwarves.

His name means "Nameless"[1] in a fan-made Gundabad Orkish dialect.

Yazneg's early life is not known of; the only thing known is that he was born in Gundabad or Moria around the time of the War of Dwarves and Orcs. Yazneg was first seen spying on Thorin and the other Dwarves, after they make camp on a rocky outcrop in the Lone-lands. Yazneg then orders his lieutenant, Fimbul, to report the Dwarves' location back to their master, Azog.

Later he was seen leading an all-out assault on the Dwarf party in an attempt to kill their leader, Thorin - however the Orcs are distracted by the wizard Radagast the Brown, using his Rabbit-pulled sled to outrun the Orcs and their Wargs. This distraction does not last as Yazneg is able to detect the Dwarves and focuses his attack on them in a last-ditch effort to claim the head of their leader, Thorin Oakenshield, for his master. Just as Yazneg and his Orcs are going to strike the Dwarves in their hiding spot, Elrond and his Elvish bodyguards arrive and kill many of the attacking Orcs and Wargs, causing Yazneg and his subordinate, Fimbul, to flee for their lives.

After being ambushed by the Elves and failing to kill Thorin, Yazneg and Fimbul travel back to Weathertop where the Orc hunters have made their camp.

Yazneg then reports to his commander, Azog, of the Elvish ambush and Thorin's escape. Upon hearing of Yazneg's failure to kill the Dwarf leader, Azog makes an example of the Orc by picking him up off the ground by his throat and throwing him to the Wargs, where he is torn apart and killed. Fimbul the Hunter then succeeds Yazneg as Azog's right hand.

An official LEGO Hobbit line webpagedescribes the character thusly: "A brute Orc who has perfected all the wits and charms that come with that title. Red-eyed and mean as a devil, Yazneg pummels all creatures great and small that have the misfortune to cross his path."[2]

There is a discrepancy between the Lego set Attack of the Wargs, which contains the model of Yazneg, and the movie The Hobbit: An Unexpected Journey on which the LEGO set is based

The LEGO model of Yazneg appears in a LEGO set depicting a scene in the movie where the Heroes are trapped in pine trees and use magically enchanted pine cones as fire grenades. However, in the movie the character of Yazneg was killed prior to this scene. Additionally, the LEGO model of Yazneg rides a white Warg, which the character of Azog is normally associated with. The meaning of this was revealed in Weta Digital's Making of Azog. Yazneg was originally intended to be the leader of the Warg Riders. But, Jackson decided to change the character to the 7-foot tall pale Orc, Azog, late in the filming. The Lego set was created while Yazneg was still the leader.

Yazneg was played by the actor John Rawls. 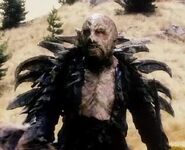 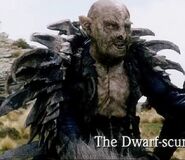