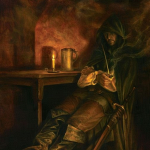 aka Fëalórin, A Child of God

Hi, welcome to The One Wiki to Rule Them All! I'm a member of FANDOM's Community Support team. Thank you for your edit to File:The Road goes ever on and on...jpg!

It looks as though none of the admins for this community are active right now, but if you need help, check out help pages or stop by Community Central to explore our forums.

You can also follow the Staff blog to keep up-to-date with the latest news and events around Wikia. And don't forget to check out FANDOM University for quick how-to videos.

Please leave me a message if I can help with anything.

Enjoy your time at The One Wiki to Rule Them All!

Let me bring you up to speed on a few things since you appear to intend to be a committed editor here.

Sentence fragments require no periods, as they are fragments. So the caption 'Thorondor above Gondolin' should have no period after it.

Remember, never put periods at the end of sentence fragments, and always italicize all mentioned book titles, with the exception of the emboldened name at the beginning of an article. See my edit of your Finding God in The Hobbit article, and the other one. HiddenVale -

Thanks for adding "The Taming of Smeagol" - original motion picture soundtrack articles are greatly lacking here. See my edits to your article - particularly to the infobox - for how all of them should look, for reference in case you create write up additional ones. The template I created which contains all tracks in the LOTR trilogy belongs at the bottom; simply type {{LOTR OMPST}} to add that.

Unfortunately when speaking of the movies'  "soundtracks" we have to disambiguate between the rarer Complete Recordings and the Original Motion Picture Soundtrack, which is the regular, familiar 1-CD-per-film release. (In the broader Complete Recordings of the films, the tracks have different names, and are wholly organized differently.) Just as with chapters of a book, scenes in a film, acts of a drama, etc.  individual tracks/songs always belong in quotes.

Have a good weekend,  HiddenVale -

RE: King of the Golden Hall

Aha, thanks for pointing that out. I've corrected it. Also, please correct your new soundtrack articles such that the first paragraph exactly replicates that of (as an exemplar) Foundations of Stone, i.e. where "Original Motion Picture Soundtrack" is spelled out like it is there, and linked, and then the full title of the film, etc. If you just utilize copy-paste it won't be laborious. Refer to these changes I made to Samwise the Brave.  In the infobox, the names of the preceding and following tracks must be in quotes like I explained earlier, and exclude those parentheticals: this is done by typing, in the infobox field, "[[Samwise the Brave (soundtrack)|Samwise the Brave]]", instead of merely [[Samwise the Brave (soundtrack)]].

Thanks for your contributions & have a good evening, HiddenVale -

(soundtrack) is still visible in the infoboxes. Look again closely at the source-text link example I gave. HiddenVale -

Yes, if you want to know which ones, I have some links of categories of my wikias based on the two trilogies of actors and extras who appeared in the films:

This isn't hugely important, but in the "See also" section of an article, there's no reason to list a topic that has already been mentioned and linked earlier on the page. I speak mainly of "Sindarin" in your new word-articles (they're corrected now).

Cheers and thank you for writing those, HiddenVale -

Also, the phrase "It is unclear which Ringwraith he played" is actually pointless. What distinguishes the Ringwraiths who aren't the Witch-king? HiddenVale -

That's a general idea I became aware of recently; glad you brought it up. A social base at Twitter would be quite beneficial, which yes, I'll allow you to spearhead only because you have an audience and notable experience there and I do not. A Discord server was brought up by someone else - that's a project I am figuring out. HiddenVale -

This all sounds great, and the page looks nice for its age!  I know of a great many substantive (i.e. showcasing a significant quality of content, and not the kind of article to be skimmed), somewhat unfamiliar articles here that, per their topic, probably aren't viewed often. Over time, I will dictate to you some of these that should be featured articles on the Twitter page. But we don't need to worry about that or about any routines quite yet, until there is a substantial amount of followers.

For the sake of closer interaction, I've reactivated an old, garbage-Twitter account with the gibberish handle @duirtEE, with which I'll be communicating with you on Twitter itself, concerning any Twitter topics, since Wikia has no private direct-chat feature. In a few moments here I'll use that to mention two things for you to change/add.   HiddenVale -

Re: Mae Govannen from a Fellow Christian and Tolkienite

The same to you, J.S. Thanks for your kind message! It's great to meet other believers who share an interest in Middle-Earth. I've been contributing here off and on for several years but I only recently got an account. Looking forward to working together here! In Christ, --Bitterhand (talk) 16:18, June 26, 2018 (UTC)

You've probably noticed the recent chatter of this here and there, but here is our References Guide, explaining a format for making citations that's gradually become prevalent over the past years. I wrote it up in May; peruse it and tell me if it's readable and/or ambiguous. HiddenVale -

Hey J.S., I asked HiddenVale about this, but wanted to get your opinion as well on creating separate pages for Fili and Kili. It just makes more sense to me, but you can read my full reasoning here. Thanks! Bitterhand (talk) 15:44, August 15, 2018 (UTC)

Thanks for your feedback! I understand your position; it's just always been my thought that each individual character should have their own page. And thanks about the signature; I'm glad to know it shows up how I intended it for other people besides myself! --Bitterhand (talk) 19:39, August 15, 2018 (UTC)

Hello Clingman! That's no problem. The responsibility of that Twitter page is not too major to require constant attention. We all get busy in life.

Where it's sensible, be sure to spread out article about the upcoming Amazon Show around the web! :) HiddenVale -

Retrieved from "https://lotr.fandom.com/wiki/User_talk:J.S._Clingman?oldid=249204"
Community content is available under CC-BY-SA unless otherwise noted.