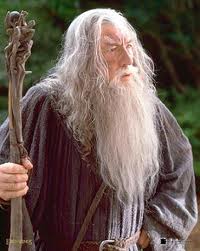 Things are really starting to heat up on the set of Peter Jackson's upcoming Lord of the Rings prequel, The Hobbit! Filming started earlier this month and Ian McKellen is downright giddy to get back in his white robe as Gandalf!

"It’s like old times," McKellen wrote on his blog. "Gandy’s clothes are hanging round my trailer and in steps Emma Harre, who dressed me last time, valiant, sporting, reliable and ready to put up once more with my early morning grumps and end-of-day sloth. We giggle as we remember the tricks of the layered costume, the hidden belts and braces. It’s all new, and looking it, and will till broken down. But it fits, even the new hat."

"The false nose too looked not quite as we’d remembered," he continued. "That’s because it wasn’t. I had requested a smaller nose than last time. The WETA sculptors were making new noses anyway, silicone replacing the old sticky gelatine which tended to slide around if the wizard sneezed or shouted."

"I stride over to the Studio smiling," McKellen recalled. "Nothing is unexpected. But next the 3D camera will eye-up the make-up, the costume and, I suppose, the actor."

Retrieved from "https://lotr.fandom.com/wiki/User_blog:Babyjabba/Ian_McKellen_gets_back_in_character?oldid=62200"
Community content is available under CC-BY-SA unless otherwise noted.