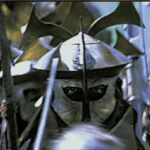 215 Edits since joining this wiki
August 11, 2012
0 Discussion posts
Hello, I am Saurons man.I've been a fan of LOTR for over half my life! I've read the books over and over and I love PJ's movie series. But I really disliked the first movie in the 1900's. If I could be anywhere in Arda,it would be Nan Curunir. I really think they should have a roller coaster during the battle of Helm's Deep when you're, say flying on a great eagle while seeing Isengard masses of Uruks chaging into the deeping wall. I hope you learn a lot from what I post. One thing I really don't get in LOTRO is that some Uruk-hai are called "Shakh-hai". Also, why does Gandalf say there's 10,000 orcs at the Morannon, it seems there's 300,000 of them.

Retrieved from "https://lotr.fandom.com/wiki/User:Saurons_man?oldid=222306"
Community content is available under CC-BY-SA unless otherwise noted.