Killercon is a proud Lord of the Rings and fanatical Star Wars fan. As well as a new member of this wiki, he is also a longtime (but controversial) member of Wookieepedia, the Star Wars Wiki, under the alias of Darth Vatrir. 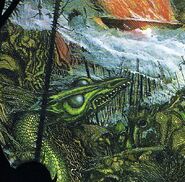 The Pits of Utumno.

Scatha the Worm.
Add a photo to this gallery

(I have a thing for fanon biographies, I find them fun.)

The warrior mercenary who called himself Killercon was born in the far north in TA 2980. When his family was killed by a raiding party of Orcs all the way from Moria, he went on a vicious Orc-killing spree and travelled south, eventually coming to Lothlorien in TA 2995. Aiding a party of Galadhrim Elves against an Uruk party from Dol Guldur, they rewarded him with proper combat training.

After spending five years amongst the Galadhrim, he departed Lorien and travelled south. Joining the Gondor army, he participated in several battles against the Mordor. After another seven years serving as a soldier, he left the military and became a freelance mercenary.

With the conclusion of the War of the Ring, he briefly travelled to the Misty Mountains to hunt serviving Orcs before settling down in Rohan, marrying and having seven children before dying in the 34 year of the Fourth Age.

Retrieved from "https://lotr.fandom.com/wiki/User:Killercon?oldid=242360"
Community content is available under CC-BY-SA unless otherwise noted.