The One Wiki to Rule Them All
Register
Don't have an account?
Sign In
Advertisement
in: Sindarin words, Mystery, Villains,
and 5 more
English

suspected to have died by self-cannibalism

Ungoliant (Sindarin; IPA: [uŋˈɡoljant]) was a primordial taking the shape of a gigantic spider. She was initially an ally of Melkor in Aman, and for a short time in Middle-earth as well. She was a distant mother of Shelob, and the oldest and first giant spider of Arda.

The true origin of Ungoliant was unknown, even to the Valar. It is said that she came from the Darkness itself that lay about Arda and was once an ally of Melkor when he looked down upon the world with envy. Considering that the Ainur passed through the Void while venturing from the Timeless Halls to Arda, it is possible she was simply a powerful Maia in the form of a spider.[1]

When Melkor was defeated and imprisoned by the Lords of the West after the first Elves awoke in Cuiviénen, Ungoliant escaped the attacks of the Valar and the hunters of Oromë and fled to the southern part of Aman. There, in a ravine south of the mountain Hyarmentir, she established her dark abode and took the physical form of a monstrous spider, and craved and sucked up all light she could find. After each feeding, she spun dark webs of gloom that strangled all passing light.[1]

Eventually, Melkor sought out Ungoliant in order to exact his revenge against the Valar and the Elves. He came to her in Avathar and told her of his plans. Though she was tempted greatly by Melkor's plan for her to drink the light of the Two Trees of Valinor, she feared the power of the Valar and was hesitant to accompany him. To mollify her, Melkor offered to sate her hunger with whatever she wished if she would aid him. She agreed, and they came shortly thereafter to Ezellohar, where she drained the Trees of their sap, poisoned them, and drank the Wells of Varda dry. The Unlight produced by Ungoliant stymied the pursuit of Oromë and Tulkas, and Melkor escaped to Middle-earth with her. However, her consumption of power of the Trees and the Wells caused her to swell to a size and shape so vast and hideous that even Melkor began to grow afraid.[1]

When they arrived in Lammoth in Middle-earth, Melkor, now known as Morgoth, hoped to escape to the ruins of Angband where the remnants of his forces awaited him. Suspecting that he intended to leave his promise to her unfulfilled, Ungoliant demanded the gems that Morgoth had stolen from Formenos before they could reach Angband. She devoured them, and grew to an even more monstrous size. She then demanded that Morgoth surrender to her the Silmarils. However, Morgoth refused, and she attacked him. Weaving her dark webs, she attempted to enmesh him in her nets and take the Silmarils by force. Morgoth gave out a terrible cry of pain as she attacked, which was heard by the Balrogs hibernating under the ruins of Angband. They awoke and immediately rushed to the aid of their Lord, tearing apart Ungoliant's webbing with their fiery whips and forcing her to break off her attack. She fled, and the Balrogs prepared to pursue and destroy her, but they were checked by Morgoth, who ordered them to return with him to Angband. Ungoliant's attack on Morgoth left an echoing scream ever after on the land, giving the area the name Lammoth, where it was said that any clamor would echo back from surrounding hills with his voice.[2]

Driven off by the Balrogs, Ungoliant fled to Nan Dungortheb where she bred with the Great Spiders that dwelt there, increasing the terror and power of her kind. The creatures that later infested the area were her surviving offspring and descendants[2], including Shelob who dwelt from the Second and Third Ages onwards on the borders of Mordor, as her last surviving child.[3] It is said that Ungoliant ultimately perished at her own hands when, in her ever-growing hunger, she eventually devoured herself.[2]

In the state of the mythology in 1916 when J.R.R. Tolkien had gone to serve in the First World War, the first precursor to Ungoliant was Ungwë-Tuita, the 'Spider of Night', who once was close to ensnaring Eärendil and dwelt in Ruamorë.[7] 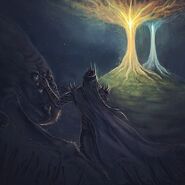 Morgoth and Ungoliant in Valinor

Ungoliant demands the Silmarils from Morgoth 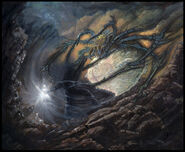 Ungoliant attacks Morgoth after refusing to give up the Silmarils.

The Balrogs aiding their master against Ungoliant