The One Wiki to Rule Them All
Register
Don't have an account?
Sign In
Advertisement
in: Uruk-hai, Agents of Saruman, Minor characters (The Lord of the Rings),
and 3 more
English

Captain of the Uruk-hai

"I command. I return to Isengard by the shortest road."
—Uglúk in The Two Towers

Uglúk was the leader of the Uruk-hai who were sent from Isengard to pursue the Fellowship of the Ring in TA 3019.

Uglúk and his company ambushed the Fellowship of the Ring at Amon Hen, succeeding in capturing two of the company's four hobbits, Meriadoc Brandybuck and Peregrin Took. In the skirmish, Uglúk killed Boromir with arrows. Under orders from his lord Saruman, Uglúk's company set out towards Isengard.[1]

Uglúk stood by Saruman's demands when a band of Orcs from Moria, led by Grishnákh of Mordor, tried to apprehend Merry and Pippin to take them to Mordor. Uglúk beheaded one of Grishnákh's followers to prevent Saruman's orders from being disobeyed. The hobbits were taken some way further, but near the borders of Fangorn Forest, an Éored of Rohirrim led by Éomer attacked and wiped out the Uruk-hai. Uglúk was slain in single combat by Éomer himself during the fighting.[2]

In The Lord of the Rings (1978), Uglúk is voiced by an unnamed extra. He has the same general appearance as most Orcs in the film, and wields a spiked mace.

He is first seen when Merry and Pippin accidentally stumble into the orc camp at Amon Hen, crashing into his back. While trying to corral them, Merry stabs and injures one of his arms; another orc tries attacking them with an axe, but Uglúk fatally strikes him with his mace because of orders to take the hobbits alive.

After Boromir is killed and the hobbits are captured, Uglúk attempts to lead his band to Isengard on foot. He kicks Pippin for tripping and then forces the hobbits to drink something. Like in the book, he has an acrimonious relationship with Mordor orc Grishnákh, knocking him down at one point to take his drink and give it to the hobbits.

He is not seen again after the Rohirrim attack on his group, but he was presumably killed along with the rest of the Orcs.

In Peter Jackson's movie adaptation of The Two Towers, Uglúk is played by Nathaniel Lees. In the preceding film, the initial leader of the Uruk-hai was Lurtz, who killed Boromir and was slain by Aragorn at Amon Hen. Uglúk took command of the troop after his death, proving himself disciplined by standing by the instructions given by Saruman from the "master".

On their way to Isengard, the Uruk-hai are intercepted by a group of Mordor Orcs led by Grishnákh, who demands they hand the Hobbits over, spurring an argument. When Mauhúr reports the smell of "man-flesh", Uglúk realizes that they are being pursued by Aragorn, Legolas, and Gimli, and he and Grishnákh forestall their arguing and begin a relentless sprint toward Isengard. After a day of haste, the Mordor Orcs tire and demand a break, and Uglúk orders that the troop rests by Fangorn Forest. There, tensions between the two groups resume. When Snaga's hunger proves a threat to the captive Merry and Pippin, Uglúk reminds him of their importance (and that they "are not for eating"), but Snaga tries to lay hands on them anyway; Uglúk beheads him in response, then proceeds to cannibalize his corpse with the other Uruks.

Distracted by their feast, the troop is suddenly ambushed by the Éomer and the Rohirrim whom Wormtongue had earlier banished, and all Orcs including Uglúk are slain. Any duel with Éomer, however, was excluded from the films.

Uglúk as depicted by John Howe

Uglúk as an action figure

Uglúk in Guardians of Middle-earth 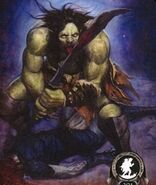 Uglúk as seen in The Lord of the Rings: The Card Game, The Treason of Saruman Expansion