The One Wiki to Rule Them All
Register
Don't have an account?
Sign In
Advertisement
in: Articles with unsourced statements, Cleanup, Ents,
and 7 more
English

Shepherd of the Trees

"Things will go as they will; and there is no need to hurry to meet them."
—Treebeard

Treebeard, also known as Fangorn, was the oldest of the Ents left in Middle-earth, an ancient tree-like being who was a "shepherd of trees". He had a very tall and stiff-limbed appearance, with bark-like skin and leafy hair.

In Chapter 5 of The Two Towers, Gandalf calls Treebeard "...the oldest living thing that still walks beneath the Sun upon this Middle-earth." In The Return of the King, Chapter 6, "Many Partings", Celeborn addresses Treebeard as "Eldest."

"Hrum, now, well, I am an Ent, or that's what they call me. Yes, Ent is the word. The Ent, I am, you might say, in your manner of speaking. Fangorn is my name according to some, Treebeard others make it. Treebeard will do."
—The Lord of the Rings, The Two Towers, Book III, Chapter IV: "Treebeard"

Before the Third Age

Treebeard was believed to be the oldest Ent who ever lived. He was so old that he remembered the time of Elves teaching the trees to speak, recalling how they wanted to talk to everything. In the time when Middle-earth was merely a giant forest, Treebeard roamed the land, presumably with his love, Fimbrethil. But after the loss of the Entwives, he and the remaining Ents dwelt in the Forest of Fangorn, isolating themselves from the outside world.

Third Age and War of the Ring

"I do not like worrying about the future. I am not altogether on anybody's side, because nobody is altogether on my side, if you understand me: nobody cares for the woods as I care for them, not even Elves nowadays."
—The Lord of the Rings: Treebeard

With the arrival of the Istari in the year TA 1000 of the Third Age, Saruman came to Fangorn and befriended Treebeard, and would often visit him. The two would talk, discussing various subjects, with Saruman gathering information about the forest itself, and in particular its intertwining paths.[1]

As the years passed and with no Entings due to the loss of the Entwives, the number of Ents fell. Some Ents in their old age became still and silent, almost becoming tree-like as they slumbered. Treebeard, Finglas, Fladrif, Quickbeam and around fifty remained, some younger, some older. When Sauron's shadow began to spread across the land once more, Treebeard and the Ents remained in Fangorn, continuing to tend the trees, and taking no part in the affairs of Men, Elves and Wizards. However, they were brought into the war when Meriadoc Brandybuck and Peregrin Took escaped from Saruman's Orcs, became lost in Fangorn Forest and befriended Treebeard. Upon learning that Saruman was cutting down the forest to power his war effort, an angry Treebeard called all the Ents together for an Entmoot. After three days of deliberation, they decided to attack Isengard, in an event known as the Last March of the Ents.[1]

Leading the attack, Treebeard helped to bring down Isengard's walls and utterly destroy them, save the tower of Orthanc and Saruman himself who sat in his tower. The Ents also broke the dam wall which had starved the once green and beautiful Wizards Vale of all its water, flooding Saruman's pits, mines, and machines of war.[2] Once Isengard was cleansed, Treebeard remained to guard Saruman, but was ultimately unable to keep him, due to the power of Saruman's voice and the fact that Treebeard could not bear to imprison any living thing.[3]

After the War of the Ring and Beyond

After Aragorn was crowned king, he promised Treebeard that the Ents could prosper again and spread to new lands with the threat of Mordor gone, and renew their search for the Entwives.  However, Treebeard lamented that forests may spread once more, but the Ents would not, predicting that the few remaining Ents would remain in Fangorn Forest until they slowly dwindled in number.  However, he still held some hope for finding the Entwives, as he asked Merry and Pippin to watch for them near the Shire, and to bring word if they were to find them.[3]

Treebeard's ultimate fate is not known. While he aged very slowly and was extremely long-lived, he was not immortal.[citation needed]He most likely underwent the same fate of all the Ents: eventually settling down in one place, growing roots and leaves, and essentially becoming a tree himself, ceasing conscious thought.

In her final words to Treebeard during their parting at Isengard, Galadriel said she would "Not [see him] in Middle-earth, nor until the lands that lie under the wave are lifted up again. Then in the willow-meads of Nan-tathren we may meet in the spring. Farewell!" This suggests that in the future, perhaps after the Dagor Dagorath, when the lands of Beleriand will be recovered again, Treebeard and, possibly all the other Ents, will awaken again and that he will meet her again in Nan-Tathren.[3]

John Westbrook voiced Treebeard in Ralph Bakshi's The Lord of the Rings (1978 film).

Peter Jackson's The Lord of the Rings film trilogy

"Side? I am on no one's side, because no one is on my side."
—The Lord of the Rings: The Two Towers

In the movie The Lord of the Rings: The Two Towers (2002), the Ents at the Entmoot initially decline Merry and Pippin's request for help. Treebeard is carrying the hobbits through the forest, when Pippin gets an idea. He asks Treebeard to carry them towards Isengard, because that is the last place Saruman would look for them. When Treebeard gets close to the forest's edge, he sees the devastation wrought by Saruman's Orcs. The trees have all been chopped down to serve as fuel for Saruman's war machine. This saddens Treebeard, as many of these trees had been his friends. Treebeard then makes a momentous decision, and calls for the other Ents.

"Come, my friends. The Ents are going to war. It is likely that we go to our doom. The last march of the Ents."
—The Lord of the Rings: The Two Towers

They attack Isengard and manage to flood it. In the book, Treebeard and the Ents decide to attack Saruman without any such coercion. They were already most likely aware of this situation.  When Gandalf arrives at Isengard in The Lord of the Rings: The Return of the King (2003), Treebeard refers to Gandalf as "young master Gandalf".

Treebeard is featured in The Lord of the Rings: Conquest in both the good and evil campaigns. In the first he appears in the Battle of Isengard level, where the player must deliver Gríma Wormtongue's key to Orthanc to him. In the second, an alternate timeline in which Frodo took the One Ring for himself sees Treebeard killed by the Balrog known as Durin's Bane.

He also appears in LEGO The Lord of the Rings: The Video Game, in which he is a playable character when one of the Hobbits is riding on his shoulder.

Same scene seen in LEGO The Lord of the Rings 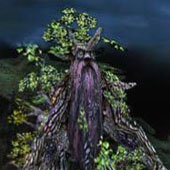 Treebeard as seen in The Battle for Middle-earth II 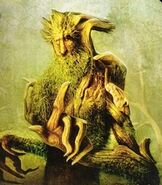 Treebeard from The Lord of the Rings: The Card Game, The Antlered Crown Adventure Pack 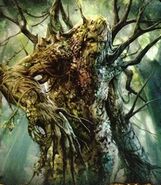 Treebeard from The Lord of the Rings: The Card Game, The Treason of Saruman Expansion