Tilda was the daughter of Bard the Bowman, and younger sister of Sigrid and Bain.

She is non-canonical as she does not appear in the works of J.R.R. Tolkien, and is only in The Hobbit film trilogy.

Born in TA 2930, Tilda was the youngest daughter of Bard the Bowman, a bargeman from Lake-town. She has an older sister, Sigrid, and an older brother, Bain.

When Bolg attacked Laketown, an orc went through Bard’s roof and Tilda threw a plate at it screaming, before Sigrid made her shelter beneath the table.

During the onslaught of Smaug in The Hobbit: The Battle of the Five Armies, she escaped the town with her sister, Tauriel, Kili, Fili, Oin and Bofur. They relocated to the ruins of Dale.

After the Orcs attacked Dale, Sigrid and her siblings hid in the Great Hall on the main square, although their journey there was beset with dangers. 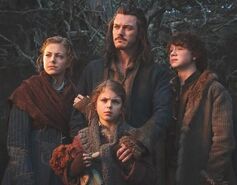 Tilda and her family 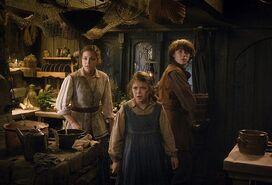 Sigrid, Tilda and Bain
Add a photo to this gallery
Retrieved from "https://lotr.fandom.com/wiki/Tilda?oldid=239904"
Community content is available under CC-BY-SA unless otherwise noted.