The Space Trilogy or Cosmic Trilogy is a series of science fiction novels by C.S. Lewis. A philologist named Elwin Ransom is the hero of the first two novels and an important character in the third.

The books in the trilogy are:

After the release of The Hobbit, C.S. Lewis wanted to try to produce a best-selling book like J.R.R. Tolkien, his close friend. In a meeting between Lewis and Tolkien, they decided that Tolkien would write a time-travel story, and Lewis one on space travel. So Lewis wrote his space travel book, Out of the Silent Planet, which later becomes the first book in the Space Trilogy. Tolkien writes his book too, but never finishes it; it is published later by his son Christopher, as The Lost Road and Other Writings.

"Out of the Silent Planet begins the Space Trilogy with the adventures of the remarkable Dr. Ransom, who is abducted by aliens and taken by spaceship to another planet. In the second book, Perelandra, Dr. Ransom must battle evil on a new world when it is invaded by the Devil's agent. The final book, That Hideous Strength, concludes the adventures with Dr. Ransom in a world of superior alien beings and scientific experiments run amok, as he struggles with questions of ethics and morality in his quest for truth."
—From the publisher 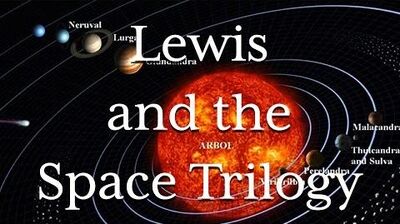 Retrieved from "https://lotr.fandom.com/wiki/The_Space_Trilogy?oldid=267114"
Community content is available under CC-BY-SA unless otherwise noted.