The One Wiki to Rule Them All
Register
Don't have an account?
Sign In
Advertisement
in: Real world, Computer and video games, PlayStation 3 games, Xbox 360 games
English

The Lord of the Rings: War in the North is a role-playing video game developed by Snowblind Studios and published by Warner Bros. Interactive Entertainment for Xbox 360, PlayStation 3 and PC. It is based on the events taking place in northern Middle-earth, in the background of the plot of J.R.R. Tolkien's The Lord of the Rings, more specifically, Peter Jackson's The Lord of the Rings films. Players take control of a hero of the war, and are able to play through the game alone or cooperatively with up to two other players.

The Mac OS X version was developed and published by Feral Interactive and released on September 18th 2013.[1]

The game features stronger graphic violence than previous Lord of the Rings games, and is the first of such games to receive an ESRB rating of M.

Players have customizable characters, upgradeable skills, and engage in dialogue.

Farin, a dwarf champion, has a crossbow. Eradan, a human ranger, wields a bow, and Andriel, an elf lore-master, can cast ranged spells at enemies. All characters have light and heavy attacks, and can roll, block and counter enemy attacks. Players can also issue orders to their AI companions if they are playing solo. There are hubs in the game which functioning as resting points for the party where they accept new quests, speak with people, or obtain new supplies. Hubs are towns or villages.

Each class also has a unique ability. The dwarf, for example, can mine for gems which can be used for crafting purposes, and he can also smash walls down where hidden treasure can be found. The game also features unlockable difficulty modes such as a nightmare difficulty. You can replay through the game and keep all your equipment and skills from the previous playthrough. The dialogue will normally present a few choices where the player can get just the facts, delve deeper into the lore or get optional side quests. The gameplay also relies upon the player working with friends (or with AI companions) to use tactics to defeat certain enemies.

Many locations that are not featured in the movies are in the game. Confirmed locations include the Ettenmoors,

Fornost, Mirkwood and Mount Gundabad. Locations from the movies also appear in the game. Players can explore Bree and Rivendell and interact with the characters there which include Gandalf, Elrond, Frodo, Bilbo, Legolas, Arwen and Aragorn. Characters from the books can also be encountered to appear in the game, such as the Ranger Halbarad, Radagast, and Elrond's sons Elrohir and Elladan.

The War in The North features three playable protagonists. Each character has different classes from one another, but each character's class is adaptable. You gain experience when killing enemies, and when you get enough experience, you gain a new level. You can then improve your stats (strength, will, stamina, dexterity), and use skill points to receive or upgrade special abilities. For example, Eradan is a Ranger and thus excels with the bow and sword but lacks the strength of Farin. He can be leveled up however to be an expert with two-handed weapons, dual wielding, weapons and shields (tank), or the bow. Farin is an expert with melee weapons but can use ranged weapons and can be leveled up to use such. He can also be leveled up to be the tank or the damage dealer of the party. Andriel is a mage, but she can wield two swords at once and level up in melee attacks, supportive magic or offensive magic.

He is the most adaptable playable character and is adept at using any weapon. He can use a two-handed sword, dual-wield weapons, or use a bow, shield, and sword. Eradan also has many stealth abilities allowing to sneak up on enemies. 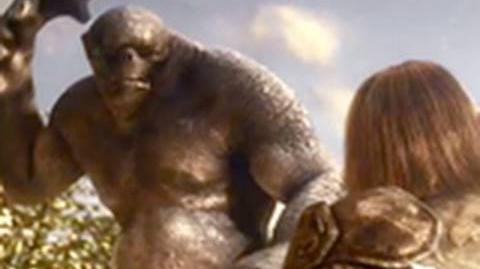 Lord of the Rings War in the North Trailer-0