The One Wiki to Rule Them All
Register
Don't have an account?
Sign In
Advertisement
in: Pages using ISBN magic links, Real World, Books,
and 2 more
English 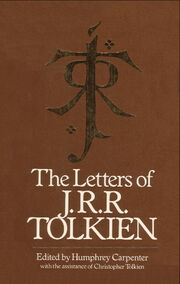 The Letters of J. R. R. Tolkien is a collection published in 1981 of 354 selected letters written by J.R.R. Tolkien over the course of his lifetime, which were edited where necessary and compiled by Tolkien's biographer Humphrey Carpenter, with the help of Christopher Tolkien. The selection contains 354 letters dates between October 1914 when Tolkien was an undergraduate at Oxford and August 29, 1973; four days before his death.

Humphrey Carpenter first collected and transcribed all the letters and made the initial selection based upon that. Then Christopher Tolkien commented upon his work and made various suggestions for changes, which where then discussed among them and adopted with various emendations. They then found it necessary to reduce the text quite severely for consideration of space. Humphrey then proposed the initial cuts on which Christopher again made various suggestions after which they came up with a final procedure needed for publication.

The 354 letters can be roughly divided into four categories:

In letters 29 & 30, we find out that a German translation of The Hobbit was being negotiated in 1938. The German firm inquired whether Tolkien was of 'arisch' (Aryan) origin. Tolkien was infuriated by this, and wrote two letters as a response. In the first one Tolkien apparently refused to give any declaration whatsoever of his origin and in the second one he proudly protested on the inquiry and, among other things, replied that "... I regret that I appear to have no ancestors of that gifted [Jewish] people". He gave his editor the choice on which reply to use. This second letter is the only one preserved and it is probable that the first one was sent.