This article describes the 2012-14 Peter Jackson live-action films. For the original animated film by Rankin/Bass, see The Hobbit (1977 film).

Peter Jackson and his wife Fran Walsh expressed interest in 1995 in adapting J. R. R. Tolkien's novels. Jackson's pitch was to film The Hobbit, and shoot The Lord of the Rings back-to-back afterward. They met with Saul Zaentz, who bought the film rights to The Lord of the Rings from MGM in the 1970s. However, frustration arose when Jackson's producer, Harvey Weinstein learned Zaentz had production rights to The Hobbit, but distribution rights still belonged to United Artists. U.A. was on the market, however Weinstein's attempts to buy those rights were unsuccessful. Weinstein asked Jackson to press on with adapting The Lord of the Rings.

Eight years later, New Line Cinema had produced The Lord of the Rings film trilogy after Miramax Films left when they wanted to condense the two planned Rings films into one. However, New Line has a limited time option on The Hobbit.[1] MGM holds the distribution rights to The Hobbit, and expressed interest in teaming up with New Line and Jackson to make the film in September 2006.[2] MGM also expressed interest in another prequel film, set between The Hobbit and The Lord of the Rings.[3]

In March 2005, Jackson launched a lawsuit against New Line, claiming he had lost revenue from merchandising, video and computer games releases associated with The Fellowship of The Ring.[4] New Line co-founder Robert Shaye was annoyed with the lawsuit, and said in January 2007 that Jackson would never again direct a film for New Line, accusing Jackson of being greedy.[5] MGM was disappointed with New Line's decision. Sam Raimi expressed interest in taking over the project.[6] In August 2007, after a string of flops, Shaye was trying to repair his working relationship with Jackson. Shaye said, "I really respect and admire Peter and would love for him to be creatively involved in some way in The Hobbit." In September, New Line was fined $125,000 for failing to provide requested accounting documents.

On December 18, 2007, it was announced that Jackson would be executive producer of The Hobbit and its sequel. It was hoped that back-to-back shooting on these films would begin in 2009 for December 2010 and December 2011 releases, respectively. New Line and MGM will co-finance the film, and the latter studio will distribute the films outside North America — New Line's first ever such deal with another major studio.[7] Producer Mark Ordesky will return to supervise the prequels,[8] and each film will cost around US$150 million.[9] The films are now expected for 2012/2013, and the New Line-MGM distribution agreement remains in place.[10] In April 2008, Guillermo del Toro signed on to direct both pictures, and he will move to New Zealand for four years after finishing Hellboy II: The Golden Army to develop the trilogy with Jackson and the teams at WETA and Wingnut Films.[11]

The Tolkien Estate filed a lawsuit against New Line on February 11 2008, for violating Tolkien's original deal with Saul Zaentz that they would earn 7.5% of the gross from a film adaptation. The Estate is seeking compensation of $150 million, because they were only paid $62,500 before production of the trilogy began. A court order was also filed that would allow the Tolkien Trust to terminate any rights to future films based on Tolkien's work, including The Hobbit and the second derivative prequel.[12]

Del Toro met with Ian McKellen, Andy Serkis, Hugo Weaving (who hope to reprise their roles as Gandalf, Gollum and Elrond respectively), concept artists John Howe and Alan Lee, Weta Workshop head Richard Taylor, make-up artist Gino Acevedo and composer Howard Shore to keep continuity with the previous films. Del Toro said that he thought the world of The Hobbit is a "world that is slightly more golden at the beginning, a very innocent environment [...] taking you from a time of more purity to a darker reality throughout the film, but [in a manner] in the spirit of the book". He also intends to push the technology of animatronics to new levels; "We really want to take the state-of-the-art animatronics and take a leap ten years into the future with the technology we will develop for the creatures in the movie. We have every intention to do for animatronics and special effects what the other films did for virtual reality."[11] He will also bring in European comic book artists to complement Howe and Lee's style on the trilogy, and he wants every actor from the trilogy to reprise their roles.[13] 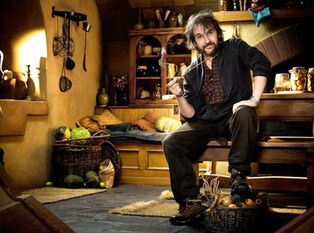 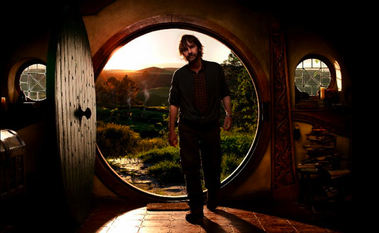 MGM expressed interest in another prequel film, set between The Hobbit and The Lord of the Rings.[14] Jackson concurred, stating "one of the drawbacks of The Hobbit is [that] it's relatively lightweight compared to Lord of the Rings... There [are] a lot of sections in which a character like Gandalf disappears for a while. From memory — I mean, I haven't read it for a while now — but I think he references going off to meet with the White Council, who are actually characters like Galadriel and Saruman and people that we see in Lord of the Rings. He mysteriously vanishes for a while and then comes back, but we don't really know what goes on."[15] Del Toro confirmed the sequel would be about "trying to reconcile the facts of the first movie with a slightly different point of view. You would be able to see events that were not witnessed in the first."[13]

The second film's story would also have depended on how many actors that could have possibly reprised their roles. Christopher Lee, who played Saruman in Jackson's films, said he would have liked to have shown the Wizard's corruption by Sauron, but he would not be comfortable flying to New Zealand at his age. However, later on, it was confirmed that he would in fact be reprising his role as Saruman, with his footage being shot in the UK.

Guillermo del Toro reluctantly left his position as director of the Hobbit movie(s) because he had many other movies he planned to work on and could no longer spend so much time on The Hobbit. Although he left as director, he said that he would continue to co-write the screenplay.

However, this incident has received negative reaction from many Hobbit fans, who have been angry at MGM for delaying the project. They also tried willing the studio to sell their rights to Warner Brothers. On July 27, del Toro responded to these angry fans, saying that "It wasn't just MGM. These are very complicated movies, economically and politically."[16] However, fans are still displeased by the studio's crisis.

Other potential directors who could have taken over The Hobbit include Sam Raimi, who expressed an interest in the films and is no longer a part of the Spider-Man franchise. Apparently the studios did want Jackson to direct the films, but names like David Yates, Brett Ratner, and David Dobkin were all thrown around. On June 25, 2010, Jackson announced that he probably would direct "two installments of Hobbit films". He was in negotiation with MGM and Warner Brothers to start shooting the films at the end of 2010.

In October of 2010, the film finally received a greenlight to begin production with Peter Jackson as the films director in addition to writer and producer. An agreement was struck between Jackson, MGM and Warner Brothers, which would allow filming to commence around February of 2011 with an estimated budget of $500,000,000 for the two films. On October 21, 2010, it was announced that actor Martin Freeman would play Bilbo Baggins. Sir Ian McKellen reprised his role as Gandalf the Grey. The first installment of the new series was released on December 14, 2012.

On September 24, 2010, the International Federation of Actors issued a Do Not Work order, advising members of its member unions (including the Screen Actors Guild) that "The producers...have refused to engage performers on union-negotiated agreements."[17] This would subject actors who work on the film to possible expulsion from the union.[18] In response, Warner Bros and New Line Cinema considered taking the production elsewhere, with Jackson mentioning the possibility of filming in Eastern Europe.[18] Disgruntled Hobbit fans also believe it was MGM who started this dispute because of their financial troubles delaying the project, but in reality, it wasn't. On 25 October 2010, thousands of New Zealanders organized protest rallies imploring that production remain in New Zealand, as shifting production to locations outside New Zealand would potentially have cost the country's economy up to $1.5 billion.[19] After two days of talks with the New Zealand government, Warner Bros. executives decided, on the 27th of October, to film The Hobbit in New Zealand as originally planned. In return, the government of New Zealand agreed to introduce legislation to clarify the distinction between independent contractors and employees working in the film production industry, and also broaden the government's financial support for big budget films made in New Zealand.

In late June 2012, Peter Jackson announced that the Hobbit would in fact be made into a second Middle Earth trilogy. He stated, "We recognized that the richness of the story of The Hobbit, as well as some of the related material in the appendices of The Lord of the Rings, gave rise to a simple question: Do we tell more of the tale? And the answer from our perspective as filmmakers and fans was an unreserved 'yes.'"

Peter Jackson and company state that they intend to "tell the untold story" of the rise of the Necromancer who is featured in The Hobbit, as well as include other details mentioned throughout the lore of The Hobbit, such as the Battle of Dol Guldur and the Dwarves of Erebor.

The third film, originally titled There and Back Again, was scheduled to release in July 2014 but was pushed to December 2014 and retitled The Hobbit: The Battle of the Five Armies.

The Hobbit: An Unexpected Journey grossed over $1.17 billion dollars at the box office and set a December record of $85,345,900.

The Hobbit: The Desolation of Smaug grossed over $960 million dollars at the box office and it is estimated that the film made a profit of $134.1 million.

The Hobbit: The Battle of the Five Armies grossed over $955 million dollars at the box office.It earned $11.2 million from Tuesday late-night shows which was the second highest of 2014.

Retrieved from "https://lotr.fandom.com/wiki/The_Hobbit_film_trilogy?oldid=175975"
Community content is available under CC-BY-SA unless otherwise noted.