The One Wiki to Rule Them All
Register
Don't have an account?
Sign In
Advertisement
in: Movies
English

The Hobbit is the name of a 1977 American animated television special, directed by Jules Bass and Arthur Rankin Jr. and based on J.R.R. Tolkien's book The Hobbit.

Bilbo Baggins the Hobbit is smoking outside his house when suddenly Gandalf the wizard appears and tells him he wants to hire a burglar. With him are thirteen dwarves; Dwalin, Balin, Kíli, Fíli, Dori, Nori, Ori, Óin, Glóin, Bifur, Bofur, Bombur, and their leader, Thorin. After they eat, Thorin explains to his fellow dwarves and Bilbo that the evil dragon Smaug stole their treasure in the Lonely Mountain, and they need Bilbo to take it back for them.

They set out the next morning, and seek shelter from a storm in a forest, where they see three trolls. Thorin tells Bilbo to steal some meat from them; however, the trolls catch them and try to eat them, until Gandalf returns and the sun rises, turning the three trolls to stone. Bilbo finds their cave and Gandalf and Thorin each take a sword. Bilbo also takes a smaller sword. Gandalf suspects that the trolls might have stolen them. He also gives Thorin a map of Lonely Mountain (Erebor) and a key to a secret door into the mountain.

They then arrive at Rivendell (Imladris), the city of Elves, where Elrond gives them food. He says that Gandalf's sword is called Glamdring the Foe-Hammer, and Thorin's sword is called Orcrist the Goblin Cleaver, and that they are elven blades. He holds the map up to the moon, revealing moon letters on it, that says to stand by a grey stone when a thrush knocks in order to see a secret passage. Afterward, they continue their journey, but are caught in another storm and seek shelter in a cave. Once inside, Gandalf disappears again, and the ponies are stolen by goblins. Bilbo and the dwarves try to save the ponies but are also captured by the goblins. The Great Goblin tries to eat Thorin for carrying Orcrist the Goblin Cleaver, but is killed by Gandalf. They continue through the cave, but Bilbo gets lost during the escape and falls into a hole.

Bilbo wakes up in another cave, where a dark frog-like humanoid named Gollum lives in an underground lake. After finding a golden ring on the ground, Bilbo is challenged to a riddle contest by Gollum; If Bilbo wins, Gollum shows him the way out. If Gollum wins, he gets to eat Bilbo. After a few riddles, Bilbo asks what he has in his pocket. Gollum is unable to answer, and loses, but first decides to show Bilbo his ring, only to find it missing. By the time he returns, Bilbo puts the ring on and turns invisible. Gollum thinks Bilbo knows the way out and goes to head him off. Bilbo follows him and runs past him (he has the chance to kill him here, but doesn't) out of the cave.

After rejoining Gandalf and the dwarves, Bilbo continues his journey with them only to run into Goblins and Wargs. They are chased up a tree, and the goblins set the trees on fire, but eagles rescue them. The Lord of the Eagles did so because Gandalf healed him from an arrow-wound a long time ago. The eagles take them to the edge of Mirkwood, and it is here that Gandalf leaves them, leaving Bilbo in charge and instructing him to write a log.

Wandering through Mirkwood, Bilbo and the dwarves are captured by spiders, but Bilbo escapes by killing a spider with his sword, and then naming his sword Sting. He finds the dwarves and cuts them free, killing a spider with a rock, and then they run from the spiders. Bilbo stays behind to put his ring on and then fight the spiders, which are forced to retreat. When Bilbo finds the dwarves, they are captured by Wood-elves. The Elvenking orders them locked away because, out of greed for the treasure, they won't tell him why they were in the forest.

After a while, Bilbo figures a way out; using his ring, he steals a key from a drunken guard to get them out of their prison cells, and has them hide in empty barrels, with him riding on top of one, along the river, out of Mirkwood and toward Laketown, where Thorin introduces himself as the grandson of the king under the mountain. Bard the guardsman and his men give them food, and they continue toward the end of their journey, at the Lonely Mountain.

Bilbo finds the secret door while the thrush from earlier knocks on the hard stone, and Thorin unlocks it with the key. Bilbo enters to steal treasure from Smaug, and puts the ring on to avoid being seen. He speaks in riddles to him, and observes that he has a weakness: a tiny unprotected spot on his chest, just below his neck. Bilbo takes off the ring before he leaves, taking a gold cup with him, and Smaug breathes fire at him. He believes Bilbo to be from Laketown, and goes there to destroy it in revenge. The same stone-knocking thrush, at Bilbo's command, tells Bard of Smaug's weakness, and Bard shoots Smaug with his black arrow, killing him, and saving Laketown in the process.

Bard leads an army of men to the Lonely Mountain to inform Bilbo and the dwarves that Smaug is gone and that he has been made king, and requests a share of the treasure to help rebuild Laketown. Bilbo is willing to do this, as there is enough for all of them, but Thorin refuses. The Elvenking and his army arrive, also with the intent of getting treasure, and a three-way war is declared between dwarves, elves, and men.

Just when the three armies meet up to battle, Gandalf appears and tells them that an army of goblins is coming. Thorin, Bard, and the Elvenking join forces to fight the goblins, however they are at a disadvantage until the eagles show up, making it a "Battle of the Five Armies". All the goblins are defeated by the combined forces of elves, dwarves, men, and eagles (Beorn is absent). Six of the original thirteen dwarves are killed (just one, Bombur, is named, and from the alive dwarves, only Gloin is seen, while standing near dying Thorin). Thorin is mortally wounded, and dies of his injuries, but parts with Bilbo in friendship.

With two bags of gold as his share of the treasure, Bilbo goes back to the Shire with Gandalf, who says that this was only the beginning. The movie ends with the ring placed in a glass case on Bilbo's mantel, and Bilbo's promise to publish his story, which he believes has come to its end (despite Gandalf's beliefs otherwise).

Differences from the book

The film was first broadcast on NBC in the United States, on November 27, 1977, and was tailored to children: the story was done in a very light-hearted style, and featured a lot of songs (most of which came from the book). Much of the story was simplified and several key parts are omitted.

The art is both praised and criticized. Some reviewers regard it as a strong point of the film. Rankin-Bass' traditionally cel-animated works were animated by the Japanese studio Top Craft, which was formed in 1972 as an offshoot of Toei Animation. Many Top Craft staffers, including the studio's founder Toru Hara (who was credited in some of Rankin/Bass' specials), would go on to join Studio Ghibli and work on Hayao Miyazaki's feature films.

The perceived accuracy of the resultant artwork varies with respect to the original book, with some scenes closely derived from written sources and previous illustrations. More creative license was taken with character illustrations: Gandalf has a hood instead of a hat; Gollum looks more "frog-like" in appearance than is described in the books, although Brother Theodore voice-work is generally praised. Elrond has a beard, although Elves do not generally grow beards in the books; and the Wood-elves, rather than being the "fair folk," are even uglier than the goblins (and the Elvenking has a thick German accent for some reason ). Smaug is extremely hairy for being a dragon, due to a literal interpretation of his being described as "cat-like".

In 1978, Romeo Muller won a Peabody Award for his teleplay for The Hobbit. The film was also nominated for the Hugo Award for Best Dramatic Presentation, but lost to Star Wars.

At the end of the film, Gandalf reveals to Bilbo that he is not only aware of Bilbo's ring, but knows that it is in fact the One Ring, and foreshadows the events of The Lord of the Rings. In the books, the ring is not discovered to be the One Ring until The Fellowship of the Ring. Such an indication would lead one to believe that Rankin/Bass was always intending to do a follow-up using story elements from The Lord of the Rings. Indeed, production had already begun on their adaptation of The Return of the King before The Hobbit had even originally aired)[1]. However, it remains a mystery as to whether or not their plans for what story elements from The Lord of the Rings were originally conceived for inclusion in this follow-up were at all affected by the 1978 theatrical adaptation by Ralph Bakshi, which was also in production at that point. 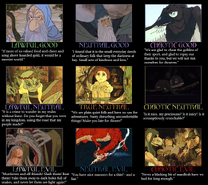 A series of complications of notable characters and lines by Phenenas

Comparisons of the main characters between the two films by ArtfulHattress