The Hobbit:
The Desolation of Smaug

The Hobbit: The Desolation of Smaug is a film, the second part of The Hobbit film series. It was released on December 13, 2013.

At the Prancing Pony Inn in Bree, Gandalf the Grey warns Thorin Oakenshield that someone is trying to have him killed. He persuades Thorin to obtain the Arkenstone to unite the dwarves, and suggests that a stealthy burglar may be needed to steal the jewel back from Smaug.

Twelve months later, Thorin and his company are being pursued by Azog and his Orc party down the Carrock following the events of the previous film. After Bilbo informs the group that a bear is also tracking them, Gandalf ushers them along to the home of a skin-changer. Upon their arrival, they are attacked by the same bear; Gandalf reveals that it is the home Beorn and that he may be able to aid them in their journey. That night, Azog is summoned to Dol Guldur by the Necromancer, and instructs his son Bolg to take over the hunt for Thorin. The next day, Beorn loans his horses to the company so they reach Mirkwood, and hinder the pursuing Orcs. Upon arrival at the forest border, Gandalf discovers Black Speech graffiti imprinted on an old ruin, coinciding with a telepathic message from Galadriel imploring him to investigate the tombs of the Nazgûl (at an unnamed location).

Without giving any reason for his sudden departure, Gandalf advises the company to follow the Elven path though Mirkwood, and to wait for him before entering the Lonely Mountain. But upon losing their way in the forest, the Dwarves are captured by giant spiders. Bilbo, with the help of the One Ring, manages to free them from the webs and names his sword Sting. However, while fighting the attacking spiders, the Dwarves are captured by the Wood-elves including Legolas and Tauriel, a captain of the guard. During their captivity, a romantic subplot develops between Tauriel and Kili.

While the others are imprisoned, Thorin is given audience with the elf-king Thranduil, but he refuses Thranduil's aid and is imprisoned as well. Under the cloak of the ring, Bilbo helps the Dwarves to escape by using empty wine barrels, which are sent floating down the river. Along the way, they are ambushed by Bolg and his Orc party, while the elves pursue the Dwarves to cease their escape. In the ensuing chaos, Kili is wounded by a Morgul arrow. Legolas and Tauriel are forced to halt their pursuit of the Dwarves in order to end the Orc onslaught. One captive is imprisoned and questioned by Thranduil. When Thranduil learns that "The One" has returned, he decides to seal off his kingdom to protect it from the impending evil. However, Tauriel leaves to save Kili, who she learns has been poisoned by the orc's arrow, and Legolas accompanies her.

Subsequently, the Company meets a man named Bard and bribe him to smuggle them into Esgaroth, the lake town where the descendants of Dale made their home, and where the Master of the Town rules with an iron fist. The group attempt to steal weapons before being captured and in the process learn that Bard is a descendant of Dale's ruler, Girion, who died attempting to kill Smaug with Black Arrows. After Thorin convinces the townfolk and Master that they will share the riches of the recaptured mountain, the adventurers receive a grand send-off. The injured Kili is ordered to remain behind while Oin, Fili, and Bofur remain to tend him in Bard's house.

As the events of Thorin's company occurs, Gandalf reaches the remote tomb of the Nazgûl and found that they have been revived. He is joined by Radagast, and it is revealed that the Necromancer cannot be a mere human as the Nazgûl answer only to one master. Returning to Mirkwood, while sending Radagast to warn Galadriel of their discovery, Gandalf enters the orc-infested Dol Guldur and is attacked by Azog. While attempting to escape, the Necromancer appears, and, following a duel between the two, Gandalf is captured. With his worst fears realized – that the Necromancer is indeed Sauron – Gandalf watches in horror as the orc army marches towards the Lonely Mountain.

Once at the Lonely Mountain, Bilbo deciphers the map's cryptic clue and uses moonlight to find the hidden keyhole that opens the secret door into the mountain. Balin then explains Bilbo's real purpose and send him down to the treasury to locate the Arkenstone. Unfortunately, Bilbo's searching quickly awakens Smaug, who initially finds the hobbit amusing but swiftly tires of him and intends to kill him. In Laketown, Bard hears the rumbling caused by Smaug's awakening and attempts to affix the last Black Arrow to the town's launcher, but is arrested. Oin, Fili, Bofur, and Bard's daughters are attacked by Bolg's hunting party before Legolas and Tauriel drive them off, with the latter remaining behind to tend to Kili. Then in a dream like state after his medication Kili admits his love for Tauriel. After convincing Thorin that they must help Bilbo, the Dwarves enter the mountain and find themselves and the Hobbit being hunted by Smaug. Tricking the fire-breathing Smaug into rekindling the forges, they attempt to kill the dragon by trapping him under a flood of molten gold. However, Smaug survives and stumbles out of the mountain determined to make the people of Lake-Town suffer for giving aid to the Dwarves, leaving Bilbo horrified at the turn of events.

The film itself is named after the dragon Smaug and the wastes surrounding his lair. The dragon's name, Smaug, derives from the Old English smeag (of or pertaining to a worm).

In addition to the previous cast from The Hobbit: An Unexpected Journey, Lee Pace, Orlando Bloom, Evangeline Lilly, Luke Evans and Mikael Persbrandt join the cast. 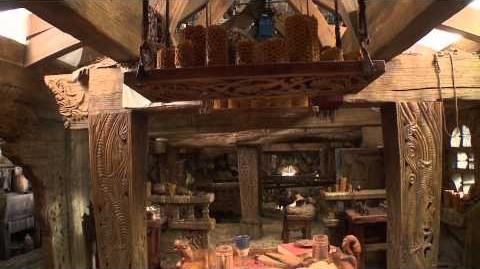 Bilbo in Smaug's hoard of treasures[1]
The Dwarves in Barrels
Bilbo in Mirkwood Forest
The Dwarves camping in Mirkwood
Dwarves on barrels
The eye of Smaug
Tauriel and Legolas
Bard the Bowman, the Master of Lake-town and Alfrid
Bilbo and the dwarves in Mirkwood
Thranduil the elf-king on his throne
Bilbo holding Sting

Bard the Bowman
Tauriel
Legolas threatens the Dwarves
Azog's return
The ruined City of Dale
Gandalf in Dol Guldur
Bilbo wielding his sword
Bilbo in the treetops
Thorin Oakenshield in Mirkwood
Smaug the dragon.
Tauriel in Mirkwood
Legolas in Lake-town
Master of Lake-town

Retrieved from "https://lotr.fandom.com/wiki/The_Hobbit:_The_Desolation_of_Smaug?oldid=143477"
Community content is available under CC-BY-SA unless otherwise noted.