'The Desolation of Smaug'

'The Fellowship of the Ring (chronologically)
IMDb profile

The Hobbit: The Battle of the Five Armies (formally known as The Hobbit: There and Back Again) is a 2014 epic fantasy adventure film and the third and final installment of The Hobbit film trilogy. Like its predecessors The Hobbit: An Unexpected Journey and The Hobbit: The Desolation of Smaug, the film was produced and directed by Peter Jackson, who also directed The Lord of the Rings trilogy. The film is the sixth and final Middle-Earth film adaptation to be released and third chronologically.

The film begins with Smaug's attack on Lake-town and continue with Smaug's demise, The Attack on Dol Guldur, The Battle of the Five Armies, and the return journey.

On February 28, 2013, it was confirmed there is a new release date for The Hobbit: The Battle of The Five Armies. It has been announced via press, and now mirrors the release dates of Peter Jackson's Middle-earth films, The Lord of the Rings and The Hobbit. The film was released on December 12th  in the United Kingdom and other countries in Europe (e.g. Austria), and December 17, 2014 in the United States.[1] The film was a major box office success, grossing over $955 million worldwide.

The film's title The Battle of The Five Armies refers to the climactic battle by the same name between the Men of Lake-town, the Elves of Mirkwood, the Dwarves of the Iron Hills, the Orc armies from both Dol Guldur and Gundabad and the Eagles with the company of the Shape-shifter.

Bilbo and the Dwarves watch from the Lonely Mountain as the dragon Smaug destroys Laketown. Bard breaks out of prison and kills Smaug with the black arrow, whose falling body crushes the fleeing Master of Laketown. Bard, chosen as the new leader, and the people of Laketown seek refuge in the ruins of Dale. Tauriel travels to investigate Mount Gundabad with Legolas. Upon arriving at Erebor, Fili, Kili, Bofur and Oin are informed by Bilbo that Thorin has been inflicted with Smaug's "dragon sickness" as he searched for the Arkenstone. It is revealed that Bilbo actually stole the Arkenstone from Smaug but knows it should be hidden from Thorin, who orders the entrance of the Lonely Mountain be sealed off.

Meanwhile, having become a prisoner in Dol Guldur, Gandalf is saved by Galadriel. Galadriel carries an unconscious Gandalf into a more open area while being taunted by The Necromancer. Elrond, Saruman, and Radagast arrive and rescue the Grey Wizard. Gandalf is saved by Galadriel and given to Radagast while Elrond and Saruman hold off the Nazgûl. Sauron appears to them with the Nine at his side. Using the power of Nenya and her Phial, Galadriel takes on the Dark Lord and the Ringwraiths, banishing them out of the fortress. Galadriel falls back fainting as Elrond supports her, realizing she has used her full strength in order to cast him away. Though Elrond believes they must warn the Free People of the enemy's return and set a watch upon the boundaries of Mordor, Saruman tells him to take Galadriel to safety while he deals with Sauron. Radagast provides Gandalf a horse and his staff before riding to Dale. At that time, Azog approaches the Lonely Mountain with his vast Orc army while learning from Bolg that an elf army under Thranduil is also approaching. Azog tells Bolg to head to Gundabad and ready their other army. Following Bolg to the fortress of Gundabad, Legolas and Tauriel see Bolg with another army of Orcs and hundreds of war-bred bats. They decide to return to Laketown to warn the others.

When Thranduil's army arrives in Dale, he forges an allegiance with Bard to claim a necklace of white gems from Thorin's treasure. Though Bard attempts to reason with Thorin to avoid further bloodshed, the stubborn dwarf refuses to listen, to his company's dismay. As they prepare for the battle, Thorin gives Bilbo a mithril vest. Thorin begins to talk like Smaug, telling Bilbo that he will never share the treasure with Bard and Thranduil, not wanting to part with a single coin. After Gandalf arrives at Dale, Bilbo sneaks out of the Lonely Mountain to hand the Arkenstone over to Thranduil and Bard. Inside the camp, Thranduil reminds Gandalf that he is the one who started all this and he will finish it.

The next day, the elf army and the armed people of Laketown gather at the entrance of the Lonely Mountain. Thranduil and Bard ride at the front, where Thorin threatens to kill them if they get any closer. Bard unveils the Arkenstone at the gates of Erebor and Thorin learns of Bilbo's actions and almost kills the Hobbit. Luckily, Gandalf approaches at the front with Bard and Thranduil, telling Thorin that Bilbo is his to keep. The other dwarves hold off their leader so Bilbo can escape down the wall to Gandalf. Then, a dwarf company under Dáin II Ironfoot arrives and is about to attack the elves on Thorin's call, but Azog sends one branch of his army to attack Dáin's force. While Thranduil assists Dáin's army, Azog sends the rest of his forces to attack Dale with Bilbo, Gandalf, Bard, and the other elves coming to its defense. Gandalf, Thranduil, Bard, and Dain do the best they can to hold off the Orc armies as more and more come, killing more Dwarves, men, and elves. Meanwhile, Alfrid takes a pile of treasure and escapes the battlefield, with Bard permitting him to do so.

Inside the Lonely Mountain, Thorin eventually overcomes his madness after a lengthy hallucination. Thorin and company burst out of the Mountain and join the battle, much to Dáin's delight. While the others aid what remains of Dáin's forces, Thorin rides towards Ravenhill with Dwalin, Fili, and Kili to kill Azog. At the same time, after being banished by Thranduil despite her and Legolas warning him of Bolg's army, Legolas and Tauriel set off for Ravenhill with Bilbo following to warn the Dwarves of the second Orc army. Thorin tells Fili and Kili to scout the towers as Bilbo came and warned them. But he is too late. Azog captures Fili and stabs him in the back before throwing him off a tower. While Thorin fights Azog to avenge Fili, Kili dies protecting Tauriel from Bolg. After Legolas kills Bolg, the Great Eagles arrive, led by Radagast and Beorn, to assist in the battle, quickly decimating the orc army. When Bilbo regains consciousness, he finds that Thorin has killed Azog but was mortally wounded in the process and dies soon after making his peace with the hobbit. Sometime after, a disillusioned Legolas leaves his father to meet with one of the Dúnedain, a man who goes by the name of Strider. Thranduil, after seeing Tauriel kiss Kili's dead body, finally accepts Tauriel's love for Kili and agrees with her plan to bury the dwarf. Bilbo bids farewell to the surviving members of Thorin's company, telling them they are welcome to join him for tea whenever they are in the Shire, to which he returns with Gandalf. As they part on the outskirts of the Shire, Gandalf reveals that he knows of the Ring that Bilbo found in the Goblin tunnels (though unaware that it was the One Ring) before they part ways on good terms. Bilbo's story ends when he returns to Bag End and finds the Sackville-Bagginses are auctioning off his belongings and are about to sell his house. The scene transitions to Bilbo on the day of his 111th birthday when he receives a visit from Gandalf, ending where the The Fellowship of the Ring begins.

The Hobbit: The Battle of the Five Armies covers the final seven chapters of The Hobbit with a few elements added from the Appendices from The Lord of the Rings. While it generally follows the story, a number of liberties were still taken:

The Battle of the Five Armies world premiere was on December 1st 2014. The event took place in Leicester square in London, Many of the cast were there and the film event went very well. The film was received very well and many critics praised the film's visuals, acting, and action sequences. However, some expressed criticism on the short length of the film. Rotten tomatoes rated it 61%.[3] 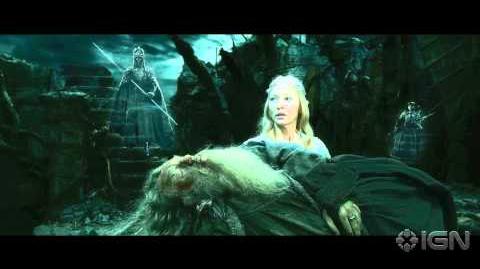 The Nazgûl in Dol Guldur

Tauriel and other people

Thorin in the Lonely Mountain

Galadriel and Gandalf
Add a photo to this gallery

Retrieved from "https://lotr.fandom.com/wiki/The_Hobbit:_The_Battle_of_the_Five_Armies?oldid=175978"
Community content is available under CC-BY-SA unless otherwise noted.