The One Wiki to Rule Them All
Register
Don't have an account?
Sign In
Advertisement
in: Real World, Movies, Films directed by Peter Jackson
English

View source
watch 01:40
Boba Fett Returns - The Loop
Do you like this video?
Play Sound

The Hobbit:
An Unexpected Journey

The Desolation of Smaug

The Hobbit: An Unexpected Journey is the first film of The Hobbit film trilogy, lasting 3 hours and 2 minutes. It was directed by Peter Jackson, who previously had directed The Lord of the Rings film trilogy. It was a major box office success, grossing over $1.017 billion worldwide. The film is the fourth Middle-earth film adaptation to be released, and the first chronologically.

Martin Freeman portrays a young Bilbo Baggins and Ian Holm reprises his role as an older Bilbo Baggins. Ian McKellen and Andy Serkis reprise their roles as Gandalf and Gollum, respectively, as do Hugo Weaving and Cate Blanchett, as Elrond and Galadriel.

The character of Radagast the Brown appears in the movie and is portrayed by Sylvester McCoy, who had been known mostly for his portrayal as the seventh incarnation of The Doctor on Doctor Who.

Sequel films in the trilogy

In The Desolation of Smaug (released on December 13, 2013), having successfully crossed over (and under) the Misty Mountains, Thorin and Company must seek aid from a powerful stranger, Beorn, before taking on the dangers of Mirkwood Forest—without their Wizard. The film follows the group through Mirkwood, their arrival in Lake-town, and their exploration of the Lonely Mountain, culminating in the desperate fight against the ancient dragon Smaug.

BLU-RAY AND DVD ELEMENTS “The Hobbit: An Unexpected Journey” Blu-ray Combo Pack, Blu-ray 3D Combo Pack and DVD Special Edition contain the following special features: Full Suite of Peter Jackson’s Production Videos. Enter Middle-earth of “The Hobbit: An Unexpected Journey” as Academy Award-winning Director Peter Jackson takes viewers behind the scenes, on location and amidst the star-studded cast in a series of video journals that showcases the forefront of latest in filmmaking with more than two hours of additional content. Highlights of the journals include:

The Hobbit: An Unexpected Journey Extended Edition was released on November 5th on DVD, and became available on iTunes on October 22, with fourteen deleted scenes.

"I know you doubt me. I know you always have. I often think of Bag End. I miss my books, and my armchair, and my garden. See, that's where I belong. That's home. And I came back because...you don't have one. It was taken from you, but I will help you get that back in any way that I can."
—Bilbo Baggins

"Far over the misty mountains cold
To dungeons deep and caverns old
We must away ere break of day
To find our long forgotten gold.
The pines were roaring on the height,
The winds were moaning in the night,
The fire was red, it flaming spread;
The trees like torches blazed with light."
—Thorin Oakenshield, Fíli, Kíli, Óin, Glóin, Dwalin, Balin, Bifur, Bofur, Bombur, Dori, Nori and Ori

"True courage is not knowing when to take a life, but when to spare one."
—Gandalf

"Thorin: I cannot guarantee his safety,
Gandalf: Understood.
Thorin: Nor will I be responsible for his fate.

"Gandalf: You'll have a tale or two to tell when you come back.
Bilbo: Can you promise that I will come back?
Gandalf: No, and if you do, you will not be the same."
—Gandalf and Bilbo Baggins

"The world is not in your books and maps… it's out there!"
—Gandalf

Dwarves of the Lonely Mountains

Hobbits of the Shire 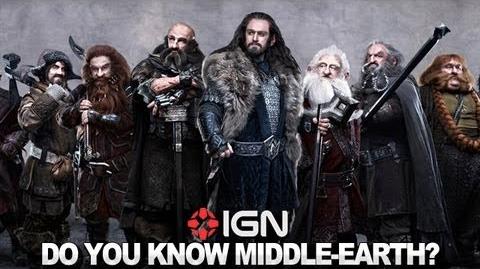 The extended edition of The Hobbit: An Unexpected Journey was released on October 22, 2013 for digital downloads and November 5 2013 for hard copies. It includes these scenes: 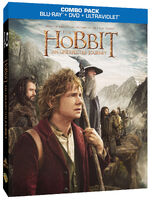 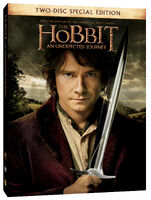 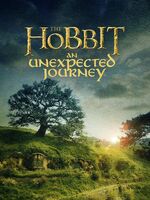