watch 03:27
Wiki Targeted (Entertainment)
Do you like this video?
Play Sound

The History of Middle-earth

The History of Middle-earth (abbreviated sometimes as HoME or THOME) is a 13-volume series of books that collects and analyses material relating to Middle-earth, twelve of which were compiled and edited by the son of J.R.R. Tolkien, Christopher Tolkien. The series is collectively a full study of the evolution of Tolkien's legendarium, featuring hundreds of transcripts, revisions, and poems.

Most of the content consists of earlier versions of already published works by Tolkien, while other portions are completely new material. These books are exceedingly detailed, to the point of documenting scraps of paper (of J.R.R. Tolkien's) that had been erased multiple times with many footnotes. Christopher Tolkien thoroughly documents the history of the writing of the Middle-earth stories, with as much detail as his father documented the fictional history of Middle-earth itself.

The first two books introduce readers to The Book of Lost Tales, a mythology for England from which Tolkien drew ideas that eventually became the 'Silmarillion' mythology. The next three books follow the history of the emerging early mythology usually known as The Silmarillion. The discussion of the published book is deferred until book ten. Books six through nine discuss the development of The Lord of the Rings, book nine's second half discussing the Númenor story (the first versions of which were covered in Book Five). Book ten and eleven discuss the Annals of Beleriand and Annals of Aman, which works were developed together with the Silmarillion tradition and which also served as source material for the published Silmarillion. Book twelve discusses the development of the Appendices to The Lord of the Rings, followed by some assorted essays from Tolkien's last years of life.

The thirteenth volume, The History of Middle-earth: Index, completely integrates all indices from the other twelve books into one large index.

The collection was first published as a single, three-volume set in 2002, by HarperCollins. In 2015, HarperCollins also published the series in paperback, with black spines and cover-art by John Howe. In 2017, HarperCollins released a special "collector's edition" of the series contained in three large, boxed volumes. 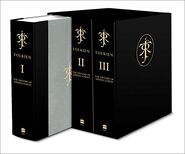 Retrieved from "https://lotr.fandom.com/wiki/The_History_of_Middle-earth?oldid=264362"
Community content is available under CC-BY-SA unless otherwise noted.