The Fairytale Journey of Mr. Bilbo Baggins, The Hobbit

The television performance was shot in the 7th studio of the Leningrad television center, which at that time was one of the most equipped hardware-studio units on Soviet TV.

Sitting in a chair, the author begins the story of the wanderings of the hobbit Bilbo Baggins. He lived in his hole until the wizard Gandalf entered his calm world, and then thirteen dwarves who were able to persuade the hobbit to go on a dangerous journey with them.

Caught by the weather in the mountains, the wanderers tried to hide in the cave, but as a result were captured by the goblins. Gandalf was able to escape and then rescued the companions, killing the goblin leader with an enchanted sword. When the goblins rushing in pursuit caught the fugitives, Bilbo fell, hit a stone and lost consciousness, and when he woke up, he found a golden ring. At this time, the hobbit was discovered by an underground resident - Gollum, who invited Baggins to play puzzles. As a result of this game, Gollum either takes Bilbo out or eats it. The hobbit wins by asking what is in his pocket. Gollum does not want to fulfill his promise, but to hunt for Bilbo he needs a ring - exactly what Baggins had in his pocket.

Once out, the gnomes fall into the clutches of giant spiders, but the hobbit saves them. Then the expedition comes to the Lake-town, the inhabitants of which greet the dwarves with enthusiasm. However, now comes the most dangerous part of the journey - penetration into the lair of the dragon Smaug in Lonely Mountain. There Bilbo first finds the Arkenstone diamond, and then meets the dragon himself. He boasts of the strength of his skin and allows the hobbit to inspect it. Baggins finds an unprotected place there, after which he taunts Smaug. He flies into the Lake-town in a rage, but the archer Bard, warned by Bilbo, falls into the gap.

After the death of the dragon, the dwarves argue about how to share the treasures. The head of the gnome squad, Thorin, does not want to share wealth, but Bilbo gives up his share and gives Arkenstone to the people.

The city is attacked by goblins, people and gnomes fight with enemies and defeat together, but Thorin II Oakenshield receives a mortal wound in battle and dies, repenting of his bad deeds.

The dwarves once again offer Bilbo a share of wealth, but he again refuses gold and accepts only a keepsake, after which he returns to his house, where he begins to write poetry and go to visit the elves in order to remember his adventures with them.

Dances are performed by artists of the Leningrad State Academic Opera and Ballet Theater.

The film exists in at least two official versions, in each of which there are episodes that fall into this version only. Timing of versions differs by 50 seconds. The television version, broadcast on air and cable channels, contains a scene with gnomes singing the songs "Crack the plates" and "Behind the blue mountains, behind the white fog". The episode is missing from the DVD version. The DVD version contains scenes of the sharing of treasures, battles with goblins at the Lake-town, the death of Thorin. The episodes are absent in the television version.

There is also a "amateur" version created on the basis of DVD. It lasts 72 minutes and also contains episodes available only in the television version. 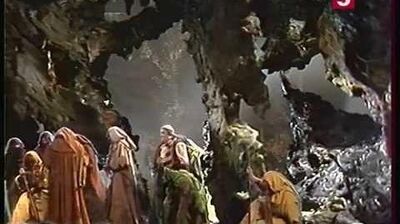 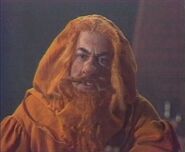 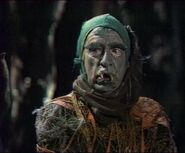 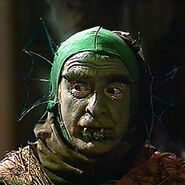 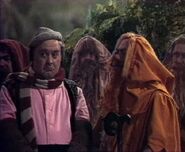 Add a photo to this gallery
Retrieved from "https://lotr.fandom.com/wiki/The_Fairytale_Journey_of_Mr._Bilbo_Baggins,_The_Hobbit_(1985_film)?oldid=260287"
Community content is available under CC-BY-SA unless otherwise noted.