The One Wiki to Rule Them All
Register
Don't have an account?
Sign In
Advertisement
in: Non-Canon Articles, Non-canonical characters, Non-Canonical Dwarves 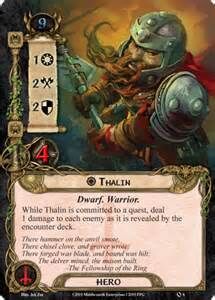 Thalin is a Dwarf Hero created by Fantasy Flight games for the Lord of The Rings Card Game (based during the 60 years between when the Dwarves reclaim Erebor (The Lonely Mountain) and when Bilbo has to let go of the ring in Fellowship of the Ring). Thalin's name is similar to Balin and Dwalin from Thorin's Company, but they are not related in any way.

Thalin's only weapon shown is a fairly short halfted battle axe with a pronounced arrow design on either end, likely allowing for better piercing when he swings. His armor is obviously of Dwarvish make, since Dwarves are notorious for forging their own weapons and armor, and disliking most of those not made by a Dwarf.

In the actual card game Thalin is largely associated with committing to quests. Though he would typically not be the best choice, given his low willpower stat of 1, his effect allows him to injure every enemy coming out of the encounter deck as long as he commits. His attack value, being 2, is solid enough for him to be used as an attacker regularly, though it may take a few turns to actually kill anything if he is attacking alone. Thalin's defence of 2 is good enough to allow usage of him as a defender, though 4 health does not last forever, and not all enemies have an attack value of 2 or less. All-in-all, he is a good all around character in the card game.