The One Wiki to Rule Them All
Register
Don't have an account?
Sign In
Advertisement
in: Rohirrim, Kings of Rohan, The Lord of the Rings characters,
and 5 more
English

King of Rohan, Lord of the Mark, Horsemaster[2]
Father of Horse-men

"Arise, arise, Riders of Théoden!
Fell deeds awake: fire and slaughter!
spear shall be shaken, shield be splintered,
a sword-day, a red day, ere the sun rises!
Ride now, ride now! Ride to Gondor!"
—The Return of the King, Book V, Ch. V: "The Ride of the Rohirrim"

Théoden, son of Thengel and Morwen Steelsheen, was the seventeenth King of Rohan, last of the Second Line of the royal House of Eorl.

Théoden was the only son of Thengel, and became king after the death of his father in TA 2980. Théoden spoke Sindarin and Westron more often than Rohirric, due to the influence of his father, and spent a part of his youth growing up in the mountain vales of Gondor, his mother's homeland.[1]

His sister Théodwyn lived with him in Edoras, and after she and her husband both died he adopted her children Éomer and Éowyn as his own. He had a son Théodred, whose mother, Elfhild, died at childbirth.[1]

By the time of the War of the Ring, Théoden had been king for nearly 40 years, and was becoming old and tired. He was increasingly misled by his chief adviser Gríma (or Wormtongue as most others in the Mark called him), who was secretly in the employ of Saruman the White. Gríma may even have been poisoning Théoden. In the last years before the War of the Ring, Théoden let his rule slip out of his hands, and Gríma gained an increasingly large hold over him. Rohan had been troubled by Orcs and Dunlendings since the time of his father and now by the new fighting Uruk-hai, who operated under the will of Saruman, ruling from Isengard.[3]

When Théoden's son Théodred was mortally wounded at the First Battle of the Fords of Isen with the Orcs of Saruman, his nephew Éomer became his heir. Éomer however fell out of favor with Wormtongue and was placed under arrest.

When Gandalf the White, Aragorn, Legolas and Gimli appeared before him, Théoden initially rebuked Gandalf's advice to resist Saruman, but after being released from the effects of Gríma, he commanded Háma to release his nephew and bring him his sword. Théoden, under advice from Gandalf, advanced to face the invasion by the forces of Saruman. However on meeting Ceorl on the road and realising the strength of Isengard he rode instead to the fortress of the Hornburg, and shortly thereafter successfully defended the keep at the Battle of the Hornburg despite overwhelming odds. After this, he became known as Théoden Ednew, the Renewed, because he had thrown off the yoke of Saruman.

Following the battle, Théoden came with Gandalf to the ruins of Isengard, where he met Meriadoc Brandybuck and Peregrin Took. He soon had favor for Merry, and expressed great interest in hearing more about the Shire, especially Hobbit lore surrounding pipe-weed. Riding to Dunharrow by mountain paths, Théoden arrived to find the muster of the Rohirrim in full swing. That night, errand riders from Gondor arrived and presented him with the Red Arrow, a symbol of dire need and summons to fulfill the Oath of Eorl.

Théoden then led six thousand Rohirrim to the aid of Gondor at the Battle of the Pelennor Fields, bravely charging the legions of Sauron, where he won great glory by defeating a chieftain of the Southrons bearing the banner of the Black Serpent in single combat.[5]

"Fey he seemed, or the battle-fury of his fathers ran like new fire in his veins, and he was borne up on Snowmane like a king of old"
—Tolkien's description of Théoden charging the Orcs

He challenged the Witch-king of the nine Ringwraiths, and was mortally wounded when his horse Snowmane fell upon him after being spooked by the Witch-king's fellbeast . He was quickly protected by Éowyn and Merry, both of whom had ridden to war in secret.[5]

Théoden's wounds were mortal and he perished on the Pelennor Fields. His body was preserved in the Hallows of Minas Tirith until Éomer returned with a cortege. Théoden was then buried in the Barrowfield outside Edoras, the last king of the second line.[6]

After his death, the Rohirrim minstrel Gléowine composed a song for him and the other Kings of Rohan.[6]

Out of doubt, out of dark, to the day's rising
he rode singing in the sun, sword unsheathing.
Hope he rekindled, and in hope he ended;
over death, over dread, over doom lifted
out of loss, out of life, unto long glory.

The name Théoden is taken from the Anglo-Saxon word þeoden, meaning "lord". It is related to the Old Norse word þjóðann, meaning "leader of the people" (i.e. "King"). It might have been translated from the original Rohirric Tûrac, an old word for "king".[7]

Earlier versions in the legendarium

In one of J.R.R. Tolkien's early drafts of his The Lord of the Rings story, Théoden also had a daughter named Idis. She often appeared alongside her cousin Éowyn, but never spoke, and was always overshadowed by her.[8]

"Arise, arise, Riders of Théoden! Fell deeds awake: fire and slaughter! Spears shall be shaken, Shields shall be splintered, a sword-day, a red day, ere the sun rises! Ride now, ride now! Ride to Gondor! Death! Death! Death! Forth Eorlingas"
—Théoden at the Pelennor Fields, to his great army

"Farewell, my hobbits! May we meet again in my house! There you shall sit beside me and tell me all that your hearts desire: the deeds of your grandsires, as far back as you can reckon them; and we will speak also of Tobold the Old and his herb-lore, Farewell!"
—Théoden departing from the Hobbits at Isengard

"We will have peace, when you and all your works have perished-and the works of your dark master whom you would deliver us. You are a liar, Saruman, and corrupter of men's hearts. You hold out your hand to me, and I perceive only a finger of the claw of Mordor."
—Théoden

"Where is the horse and the rider? Where is the horn that was blowing? They have passed like rain on the mountain... Like wind in the meadow. The days have come down in the west, behind the hills... Into shadow."
—Théoden to Gamling at Helm's Deep

"We shall have peace. We shall have peace when you answer for the burning of the Westfold, and the children that lie dead there. When the lives of the soldiers, whose bodies were hewn even as they lay dead against the Gates of the Hornburg are avenged! When you hang from a gibbet, for the sport of your own crows, we shall have peace."
—Théoden King to Saruman

"I will not end here, taken like an old badger in a trap. When dawn comes, I will bid men sound Helm's horn, and I will ride forth. Will your ride with me, then, son of Arathorn? At least...we may make such an end, as will be worth a song!"
—Théoden

In The Lord of the Rings (1978 film), Théoden was voiced by Philip Stone.

In The Return of the King (1980 film), Théoden was voiced by Don Messick.

"Where is the horse and the rider? Where is the horn that was blowing? It has passed like rain on the mountain, like wind in the meadow. The days have gone down in the West, behind the hills, into shadow."
—Théoden, to Gamling, in The Lord of the Rings: The Two Towers

Théoden, portrayed by Bernard Hill, is a major character and secondary protagonist in Peter Jackson's film trilogy. He appears in The Two Towers and The Return of the King. Théoden is depicted as a considerate leader and mighty warrior who does not believe that Sauron can be defeated; however, he wishes to die with honor and make him and his people "worthy of remembrance."

In The Two Towers, Théoden is initially outright possessed by Saruman, in a deviation from the books. While under Saruman's spell, Théoden appears extremely aged, with grey hair and glassy eyes, and is unwilling to defend Rohan from the Dunlendings and Uruk-hai pillaging the Westfold. After Théoden's son Théodred is killed by Orcs, the new heir Éomer is banished by Wormtongue (on "orders" of the king) from Edoras; he takes with him some 2,000 Rohirrim riders.

Gandalf, Aragorn, Gimli, and Legolas arrive in Edoras and Gandalf frees Théoden from Saruman's spell. The king recovers his sanity and a healthy appearance, and banishes Gríma (though originally desiring to execute the spy). Théoden mourns his son and decides that the best way to defend his people is to evacuate the people of Edoras to Helm's Deep, a decision Gandalf criticizes.

In The Two Towers, Théoden seems unsure as to whether his countrymen can fend off Saruman's hordes. Before the Battle of the Hornburg, he poetically expresses his belief that the world of men is soon to be destroyed. As the Uruk-hai overwhelm the fortress, he seems resigned to his fate; when he "rides out" with Aragorn on a final suicide charge, it is more so in order to die with honor than to actually defeat the Uruk-hai. However, Gandalf arrives during their charge and liberates Helm's Deep. The victors ride to Isengard to challenge Saruman, only to find the Ents have already defeated his forces and sealed him in his tower. Saruman attempts to persuade Théoden to make peace with him, but the king rejects him. Seeing Gríma atop Orthanc, he offers to grant him clemency, but as the former man of Rohan wavers, Saruman strikes him down. In revenge, Gríma stabs his master in the back before being felled by Legolas' arrow.

By The Return of the King, Théoden has become more confident in himself and his people. He boldly declares that Rohan will answer Gondor's call for aid once the Beacons of Minas Tirith are lit, and he assembles an army of 6,000 riders to liberate Gondor from Mordor's armies. Though he does not believe that his men can actually defeat Sauron, he inspires the Rohirrim to ride to Gondor's aid for the sake of honor.

At the Battle of the Pelennor Fields, Théoden leads the Rohirrim in their charge against the Orcish armies. The Rohirrim largely defeat the Orcs only to face a greater challenge in Harad's Mûmakil. Théoden's riders appear well on the way to victory when the Witch-king of Angmar arrives and throws Théoden from his steed. The king is crushed beneath his horse, and is about to be eaten by the Witch-king's Fellbeast when Éowyn intervenes. Théoden lives long enough to witness his niece kill the Witch-king before succumbing to his injuries.

In the epilogue, it is suggested that Éomer ascends to the throne of Rohan, although at one point in the film Théoden suggests that Éowyn should rule if anything were to happen to him. (Likely under the assumption that if he dies in Gondor, Éomer will be dead with him.) 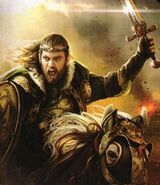 King Théoden from The Lord of the Rings: The Card Game, The Morgul Vale Adventure Pack 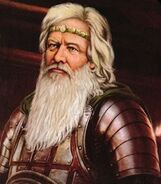 King Théoden from The Lord of the Rings: The Card Game, The Treason of Saruman Expansion