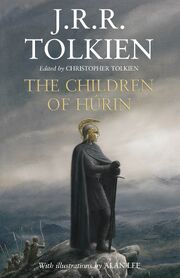 The Children of Húrin is the first of the Great Tales of Middle-earth. It was started by J.R.R. Tolkien in 1918 and had been revised many times, but it wasn't published until 2007, when more than thirty years of notes written by Tolkien were compiled and edited by his son, Christopher.

It is a closer account of the story of the wanderings and deeds of Túrin Turambar, son of Húrin, and his sister Niënor, their struggle against fate (and the curse cast upon Húrin's kin), as well as the tragic end of their lives and that of their mother, Morwen.

Retrieved from "https://lotr.fandom.com/wiki/Template:F/4?oldid=241654"
Community content is available under CC-BY-SA unless otherwise noted.