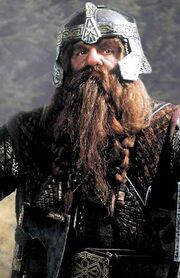 Gimli, son of Gloin, was a well-respected dwarf warrior in Middle-earth. He was a member of the Fellowship of the Ring, and was the only dwarf to readily fight alongside men and elves in the war against Sauron at the end of the Third Age.

Gimli was the son of Glóin, one of the former companions of Bilbo Baggins. He was by far remote a descendant of Durin the Deathless, father of the Dwarven people Gimli belongs to, but was not a member of the royal line. (Gimli was also the first cousin once removed of Balin, Lord of Moria).

When the One Ring was discovered, Elrond summoned representatives from the various races and nations of Middle-earth to Rivendell to formulate a way of destroying the ring. Gimli was one of the dwarven representatives. When others started to volunteer to accompany Frodo Baggins on the journey to Mordor, he volunteered, in no small part out of suspicion over Legolas Greenleaf, who had also volunteered.

Retrieved from "https://lotr.fandom.com/wiki/Template:F/18?oldid=199770"
Community content is available under CC-BY-SA unless otherwise noted.