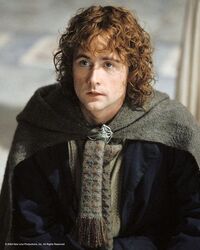 Peregrin Took (TA 2990-?), better known to his friends as Pippin, was a Hobbit, and one of Frodo Baggins's youngest but best friends.

The hair on his head and his feet (which are exceptionally hairy, even for a Hobbit) was almost golden and curly. At the beginning of Quest of the Ring he was smaller than the rest of the Hobbits because he was the youngest.

Pippin was six years younger than Merry, and thus was far younger than Frodo. He was a worthy accomplice to Merry's plans, but showed his age as well; he was still a cheerful, if occasionally thoughtless Hobbit, and was first to miss the comforts of Hobbit life. At Rivendell, Pippin was nearly denied the chance to accompany Frodo by Elrond who seriously considered using the youngest Hobbit as a messenger to the Shire. Gandalf, however, supported his and Merry's claims of friendship and loyalty, and Pippin was chosen as the last member of Fellowship.

Retrieved from "https://lotr.fandom.com/wiki/Template:F/14?oldid=199759"
Community content is available under CC-BY-SA unless otherwise noted.