The One Wiki to Rule Them All
Register
Don't have an account?
Sign In
Advertisement
in: Real World, The Hobbit films actors

Stephen Colbert is a comedic actor and satirist who had his own self-titled show on the cable channel Comedy Central, and now is host of the Late Show. He is a long-time fan of J.R.R. Tolkien's works and reads Elvish. He appeared in a cameo as a Lake-town spy for The Hobbit: The Desolation of Smaug. In the beginning stages of his announcing that he was going to be in the first Hobbit sequel, he was thought to be playing an Elf with no dialogue.

Prior to the first Hobbit installment coming out, Colbert had stars like Ian McKellen and Martin Freeman appear on his show to discuss and promote the film. Both stars ended up seeing just how huge a Tolkien fan Colbert really was. In anticipation of The Hobbit: The Battle of Five Armies, he interviewed Smaug on his show.

Colbert owns prop replicas of Andúril, gifted to him on-set by Viggo Mortensen, and Sting, given to him by Peter Jackson during filming for The Desolation of Smaug.

Peter Jackson when talking about Colbert has said, "I have never met a bigger Tolkien geek in my life … Philippa Boyens is our resident Tolkien expert, and when Stephen came down to visit the set, we put him head to head with Philippa on a Tolkien quiz—and Stephen triumphed. I have to say, his encyclopedic knowledge of Tolkien is spectacular, and points to a deprived childhood in some respects.”

As as Lake-town spy in The Desolation of Smaug

In-costume as the panelist at 2014 Comic-Con promotion

Interviewing Smaug on his show 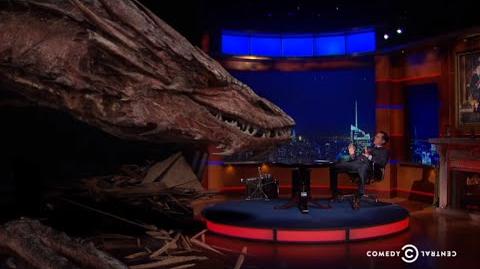 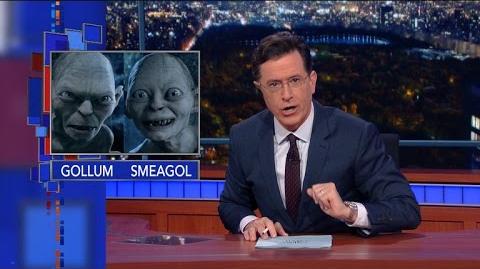