The One Wiki to Rule Them All
Register
Don't have an account?
Sign In
Advertisement
in: Articles with unsourced statements, Elven kindreds & peoples
English

The Silvan Elves, or Tawarwaith in Sindarin (also called Wood-elves, Woodland Elves[1], or East-elves[2]) were a subgroup of the Nandor, ultimately of Telerin descent. As Úmanyar, they, like the Sindar, began the Great Journey but did not complete it. In the Third Age, most remaining Silvan Elves lived either in Lothlórien or the Woodland Realm.

Their kindred across history were ruled by Ñoldor or Sindar elves.

"These are not wicked folk. If they have a fault it is distrust of strangers. Though their magic was strong, even in those days they were wary. They differed from the High Elves of the West, and were more dangerous and less wise. For most of them (together with their scattered relations in the hills and mountains) were descended from the ancient tribes that never went to Faerie in the West."
—The Hobbit, "Flies and Spiders"

The Silvan Elves were of Nandorin background, descended from the followers of Lenwë, who were fascinated by the landscape East of the Misty Mountains and afraid to attempt to cross them. They thus abandoned the Great Journey, choosing instead to remain in the wide forests, where they became a scattered people. The Silmarillion also implies that many Avari joined these realms.[citation needed]

Little is known of the wanderings of the Nandor, save that they spread throughout the Vales of Anduin over a period of many centuries, some following the Great River southward, eventually settling at the Mouths of Anduin or instead turning north again into Eriador, where eventually Denethor gathered as many as he could and crossed the Blue Mountains into Beleriand. These were later known as the Green-elves of Ossiriand, and were welcomed by Thingol as long lost kin.[3]

Some of the Nandor, however, stayed in the forested Vales, and these would become the Silvan Elves - hidden away in their woodland fastnesses and were to their estranged kin hardly distinguishable from the Avari, and indeed sometimes living in friendship with them. Their language had diverged to such an extent that it was barely intelligible to the Sindar and Ñoldor when they met the Silvan Elves again in the Second Age, though the languages were found to be obviously related. It was not until this renewed contact between the kindreds and the guidance of the Sindar and Ñoldor that the Silvan Elves again became an organised people and increased in wisdom. This however also led to the Silvan tongue being largely forgotten, Sindarin instead becoming the primary spoken language by the end of the Third Age, with the Silvan dialects only surviving in the names of places and people.[4]

The renewed contact was caused by the destruction of Beleriand after the War of Wrath, for when the Second Age was young, the Silvan Elves welcomed those survivors of the calamity who, rather than crossing the Sea, re-joined their kindred east of the Misty Mountains [5]. Indeed soon many of the Silvan Elves came to be ruled by these Sindar refugees, primarily in Lothlórien and the Woodland Realm.[4]

Elves primarily of Silvan blood in Mirkwood were known to be distrustful of Dwarves but friendly to Men, with whom they traded. The Elves were typically known as a kind and noble people, the great spiders being the only creatures upon which they had no mercy. Mirkwood had been called "Greenwood the Great" until around the year TA 1050, when the shadow of Sauron fell upon it, and men began to call it Mirkwood. During his journey to the Lonely Mountain, Bilbo Baggins had to rescue the Dwarves of Thorin II Oakenshield's company from these Elves. These Elves had sent hosts to both the War of the Last Alliance [6], and in Bilbo's time, the Battle of Five Armies[7].

Legolas of the Fellowship of the Ring, although he lived among them, was not truly one of the Silvan folk. As a son of the Elven-king Thranduil, whose father Oropher had originally come from Doriath [8], Legolas was at least half of Sindarin heritage on his father's side (his mother's identity is unknown).

By the end of the Third Age, Sindarin had become the primary language of the Woodland Realm, Silvan being almost completely forgotten[4], so that in the early years of the Sindarin rule over the Silvan Elves, the Sindar for a time "deliberately" adopted the language and customs of the Silvan Elves, as "they wished to return to the simple life natural to the Elves before the invitation of the Valar had disturbed it".[8]

The Silvan Elves of Lórien were the larger part of the Galadhrim or the Tree-people, who were a mixture of Elves of Nandor, Ñoldor, and Sindar descent. Most of the Sindar that came to Lórien were refugees from Beleriand, arriving early in the Second Age, and the Sinda Amdír became the King of Lórien. After Amdír was killed in the Battle of Dagorlad, his son Amroth became king.[6]

After the destruction of Eregion, they were joined by many Sindarin speaking Ñoldor, led by Galadriel and Celeborn, who fled to Lórien through Khazad-dûm. Galadriel was of Ñoldorin descent, being the daughter of Finarfin, while Celeborn was of Sindarin descent of the Kingdom of Doriath. When Amroth was lost in the Third Age, Galadriel and Celeborn became known as the Lady and Lord of Lórien, but neither of them took the vacant kingship.[6]

At the time of the War of the Ring, they spoke an accent or dialect of Sindarin which had changed so much that Frodo Baggins, who spoke some Sindarin, could not understand them. Additionally, few Elves in Lórien could speak Westron, so that Haldir, one of the few that could, had to accompany them on their way to Caras Galadhon.[9]

The Silvan Elves are shown to be great in number when Thranduil unveils his entire army before the Battle of Five Armies. Their number is estimated to be at least 8,000 strong in the film. The army consists of spearmen, archers, and swordsmen. 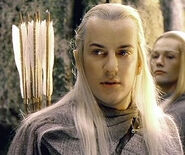