Start a Wiki
watch 11:05
'Lord of the Rings' Lore: The Full History Of Shelob The Primordial Spider
Do you like this video?

Unknown, possibly during the First Age

"But still she was there, who was there before Sauron, and before the first stone of Barad-dûr; and she served none but herself, drinking the blood of Elves and Men, bloated and grown fat with endless brooding on her feasts, weaving webs of shadow; for all living things were her food, and her vomit darkness."
—The Two Towers

Shelob was a Great Spider. She was the greatest offspring of Ungoliant. During the Third Age she lived in Mordor and was known to feed indiscriminately, preying on orcs, men, elves, and dwarves alike. She was encountered by Frodo Baggins and Samwise Gamgee in their quest to destroy the One Ring.

Shelob's early history is completely unknown, save for the assumption that she was born in the Ered Gorgoroth during the early First Age. By the Second Age, she often feasted on her own children, and that at some point after fleeing from Beleriand, yet long before Sauron took the land of Mordor for himself--even before the first stone of Barad-dûr was placed--she spun a dark lair in Ephel Duath (Mountains of Shadow), near Cirith Ungol in the passes above Minas Morgul. For hundreds of years, she resided in this mountainous region, making a labyrinth of webs within a network of caves to better trap her prey, which included all creatures great and small. She feasted primarily on those who wandered into her web, although if a particularly juicy morsel was available, she would silently pursue and kill it.

Sauron was aware of Shelob's presence in the mountains and allowed her to dwell there. It proved to be beneficial to them both: in return for protecting the most secret passes into Sauron's domain, Shelob got free reign to do as she would. On occasion, Sauron even left prisoners where she could find and devour them, or sent servants who displeased him there to their doom. Sauron with a rare show of humour called her "his cat", as she functioned like a cat, being a pet that did not accept his authority. She knew and cared little for rings or towers, existing only to gorge her insatiable appetite for flesh and blood.

At one point, Gollum, after being set free from Mordor, stumbled into her lair; it is not known what he sought there. As he mainly prefers staying away from danger, and the cave being littered with bones from Shelob's meals evidently is dangerous, he must have had a clear purpose. He survived his encounter with Shelob by promising to bring her tastier meats. The Orcs in Cirith Ungol apparently know him well and have seen him on several occasions in the caves; they comment mockingly that he is probably not good for eating. So one can speculate Gollum has served as Shelob's servant on several occasions.

This promise was fulfilled when Gollum led the Ringbearer and his servant into her lair in hopes that she would kill them, allowing him to reclaim his precious since she does not care for it. Frodo and Sam, immediately noticed that the cave reeked extremely foul and had an evil air. Gollum had already sneaked away, leaving them alone. They managed to pass a barrier of cobwebs, Frodo slashing them with Sting; Sam's sword was incapable of harming the webs. Using the Phial of Galadriel, they managed to fend her off the first time. Earendil's Star the Light from the Phial, caused unbearable stabbing pain to Shelob's darkened senses,but she returned, to attack Frodo poisoning him with her stinger in a surprise attack just as they had reached the exit of the cave on the Mordor side.

Sam then assaulted the creature using Sting in order to save his master, who lay poisoned after Shelob's surprise attack.  In a pitched battle, Sam managed to stab one of her great eyes, injure her leg, and pierce her great belly, the most grievous wound.  Sam was lucky indeed, as Shelob caused this wound herself, when she attempted to stab him with the venomous stinger in the underside of her abdomen. None had ever wounded her so badly before.

It is not known if Shelob recovered from the battle, or if she succumbed to her wounds, as the book specifies that her fate will remain unknown to the people of Middle-earth. The last time she is mentioned is when Sam wears the one ring, and hears Shelob "bubbling" in her misery faraway, as his sense of hearing is vastly improved by wearing the Ring.

While Shelob's ultimate fate was unknown, her offspring (which were lucky enough to escape her hunger) continued to produce new generations of spiders. At some point after Men took dominion over all the world, the great Spiders disappeared. If Shelob did survive her encounter with Samwise and Frodo, she was the last of her kind in Middle-earth.

Like most spiders, Shelob had spindly legs, multiple eyes, and venomous chelicerae. She usually immobilized her prey with her paralyzing bite that enabled her to feed on her victims at her leisure, but could also crush her prey to death by swiftly dropping on them. Her head was cris-crossed with scars, and she had a number of missing eyes. The Orcs comment she usually would paralyze her victims and trap them in webs, keeping them alive for some time before killing them.

Gollum gives an indirect mention of Shelob near the end of the film, saying that "she might help us..." but she does not appear.

Shelob does not appear, nor is she mentioned in Jules Bass/ Arthur Rankin Jr's 1980 animated film.

Lord of the Rings film trilogy

Unlike the books, Shelob makes her first appearance in Peter Jackson's The Return of the King, rather then The Two Towers, explained as that, if she had appeared in The Two Towers, there would be very little for Sam and Frodo to do in the final film.  In this adaptation, Shelob appears as a CGI animated creature, roughly eight feet in length and seventeen feet across. 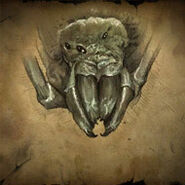 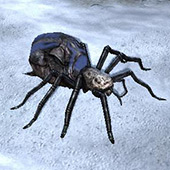 Shelob in the game as a Hero

Shelob (in the background) from LEGO The Lord of the Rings: The Video Game
Add a photo to this gallery

Retrieved from "https://lotr.fandom.com/wiki/Shelob?oldid=155926"
Community content is available under CC-BY-SA unless otherwise noted.