The One Wiki to Rule Them All
Register
Don't have an account?
Sign In
Advertisement
in: Pages using ISBN magic links, Books, The History of Middle-earth, Primary literature
English

The History of Middle-earth 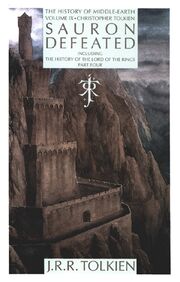 Sauron Defeated is the ninth volume of The History of Middle-earth, compiled by Christopher Tolkien and first published in 1992.

Part One, "The End of the Third Age", is the last part of The History of The Lord of the Rings, which had begun with The Return of the Shadow, and concerns J.R.R. Tolkien's development of the story of The Return of the King. Part Two concerns the "Notion Club Papers", and Part Three contains the earlier versions of the Drowning of Anadûnê, which in finality became the tale of the Downfall of Númenor.

The inscription of the book reads: "In this book is traced first the story of the destruction of the One Ring and the Downfall of Sauron at the End of the Third Age."