The One Wiki to Rule Them All
Register
Don't have an account?
Sign In
Advertisement
in: Articles with unsourced statements, Sindarin words, Rohirrim, Men
English

"They are proud and willful, but they are true-hearted, generous in thought and deed; bold but not cruel; wise but unlearned, writing no books but singing many songs, after the manner of the children of Men before the Dark Years."
—Aragorn, The Two Towers

The Rohirrim were a race of Men who inhabited the land of Rohan, which was named after their famous horses.

The Rohirrim were a tall, blonde, and mostly blue-eyed people, the men were large, husky, and handsome while the women were particularly beautiful. They were heroic, noble, brave, strong willed and fiercely independent, remaining within their own language and culture. Their horses were very important assets in their everyday lives, with their entire culture based around the breeding and trading of them. They lived mostly in villages on the plains of Rohan where their horses grazed, and had few cities.

The Rohirrim were descended from the Northmen of Rhovanion and the Éothéod, a race who lived in the vales of the Great River Anduin but were removed to Calenardhon, a plains-land granted them in perpetuity by the Ruling Steward of Gondor, Cirion, in reward for the assistance that they offered Gondor at a time of great need. As a result, they were lifelong allies of Gondor bound by the Oath of Eorl. At that time Calenardhon was renamed Rohan (Horse-land) after their many horses. By the Rohirrim themselves Rohan is usually called "The Mark".

The terms Riders of Rohan and Riders of the Mark are commonly used and refer specifically to their mounted soldiers. The former is a chapter title in The Two Towers. The "King's Riders" were specifically the horsemen who formed the king's bodyguard.

The Dúnedain of Gondor believed that the Rohirrim were distantly related to them (having descended from the Atanatári of the First Age) and describe them as Middle Men, that being inferior to the Númenóreans in both culture and descent, but superior to the Men of Darkness who had worshiped and served Sauron.

The Rohirrim had contacts with Elves in their ancient history, and knew of Eru, but like the Dúnedain they did not worship him in any temples. They seem to have highly valued the Vala Oromë the Hunter, whom they called Béma.

They were ruled by a line of kings descended from Eorl the Young, who had first brought them to Rohan, and in time of war every able man rode to join the Muster of Rohan.

Rohirrim is Sindarin for People of the Horse-lords (sometimes translated simply as Horse-lords) and are mostly used by outsiders: the name they had for themselves are Eorlingas, after their king, Eorl the Young, who had first brought them to Rohan. Rohirrim is a collective noun, and when used grammatically as a subject or object is usually used with the definite article (i.e. the Rohirrim). It can also be used as an adjective to modify another noun (e.g., a Rohirrim village, a troop of Rohirrim cavalry, etc.) The pure adjectival form, meaning "pertaining to the Rohirrim," is Rohirric (Rohirric tactics, Rohirric culture, etc.)[citation needed]

The Rohirrim seem to resemble the ancient Anglo-Saxons, a Germanic people comprising three tribes, the Angles, the Saxons, and the Jutes, who invaded and conquered Britain around the 5th century. J.R.R. Tolkien was himself a distinguished professor of the Anglo-Saxon language (Old English).

The people of Rohan resemble the Anglo-Saxons in several ways. In appearance they are fair skinned and mostly blond haired, like the Germanic invaders, but they also have cultural links to those ancient tribes. This is shown in the type of armour used by Rohirric warriors, which includes an extensive choice of mail, both chain and scaled, and in their reverence for the sword as an expensive yet symbolically important weapon, to be given a title and passed down through generations.

Rohirric armies are also known to favour the shield-wall, which was a strategy commonly employed by the Anglo-Saxons. Finally, common names given to the people of Rohan tend to resemble names of Old English. For instance, the name Éomer is found in the Beowulf saga (an epic Tolkien built much of his career around), and means "horse-famous" in Old English. While these traits of the Rohirrim could be passed off as typical of any agricultural, Northern society of Europe, such as the Vikings, taken as a whole and with the knowledge that Tolkien was an acclaimed professor of Anglo-Saxon and indeed had set out to create a uniquely "English" mythology, it can be inferred that the descriptions of the Rohirrim were heavily drawn from those of the ancient Anglo-Saxons.

However one aspect of the Rohirrim, their close affinity to horses as beasts of warfare and their extensive and superb use of cavalry, is not a trait that is shared with the ancient Anglo-Saxon tribes, who were predominately foot-soldiers in wartime. (It was, however, characteristic of the Ostrogoths, a Germanic tribe that dominated eastern Europe during the late Roman period, whose language was also studied by Tolkien.) Tolkien's choice to represent the Northern-descended Rohirrim as a horse-loving people is in itself quite interesting, but is obviously part of his unique mythology. Yet it has been argued that one possible reason for the horse inclusion is the events of 1066 in England. According to Tom Shippey, Tolkien imagined the Rohirrim to be a horse-culture because the only surviving Anglo-Saxon words for color were all words for the colors of horses.

At this point the Anglo-Saxons were defeated by the invading Normans, who were able to win the battle through their superior use of cavalry. Therefore, it has been stated that this inclusion may an idea influenced by this, that if the Anglo-Saxon had been horse-lords they could have won the Battle of Hastings thus preserving the Anglo-Saxon culture which Tolkien enjoyed. Certainly, whether the Rohirrim truly are partly or wholly based on the Anglo-Saxons can be a topic of debate among Tolkien fans and scholars.

It should also be noted in Brittany, in France. The ancient House of Rohan, hence the Norman connection with the Rohirrim rather than an Anglo-Saxon connection. The Normans were well known Horsemen.

The Army of Rohan at the Pelennor Fields

Rohirrim soldier preparing for the Battle of the Hornburg

Member of the Éored 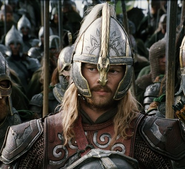 Éomer, Third Marshall of the Riddermark