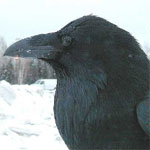 Roäc is the son of Carc, and the chief of the ravens (talking ravens) of Ravenhill near the Lonely Mountain (Erebor).

By the time of the Battle of Five Armies, Roäc was 153 years old, a descendant of the ravens that remained in Ravenhill, after their allies, the Dwarves, were driven out by the Dragon Smaug. His father Carc had seen Smaug descend on the mountain. Roäc told Thorin and Company, that the Dragon was defeated, and he served as a messenger between Thorin, and Dáin II Ironfoot in preparation for the troubles that followed.

Roäc appears only in The Hobbit.

Roäc was voiced by John Wyse in the The Hobbit (1968 radio series) and by Pat Franklyn in the The Hobbit (1979 radio series). He is seen in The Hobbit: The Battle of the Five Armies, though in a non-speaking capacity. When Bard the Bowman cames to the Mountain to make a deal with Thorin, Roäc is seen flying away towards Iron Hills. He arrives in the midst of a confrontation between the Thorin's Company and the alliance of Mirkwood Elves and Laketown men, perching on the stone wall at the entrance to Erebor and simply nodding to Thorin, indicating the arrival of his cousin Dáin.

Retrieved from "https://lotr.fandom.com/wiki/Ro%C3%A4c?oldid=156507"
Community content is available under CC-BY-SA unless otherwise noted.