Rhudaur was the smallest of the kingdoms that originated from the break-up of Arnor in TA 861. The other kingdoms were Arthedain and Cardolan.

The land between the rivers Hoarwell and Loudwater was also considered part of Rhudaur. It was called the Angle, and it is here that the first Stoor Hobbits came into Eriador around TA 1150. However, due to the increasing hostility of Angmar these Stoors fled the region around TA 1356, with some of them moving west to the Shire, and others moving back to Wilderland.

From the start of its existence, Rhudaur was unfriendly towards the two other successor states, and took part in a bitter conflict with Arthedain over the Tower of Amon Sûl and the Palantír associated with the tower.

The last Kings of Rhudaur were not of Númenórean blood, but were descended of Men in service of Angmar. Under their rule the land became a vassal of Angmar, and thus enemies of Cardolan and Arthedain.

Angmar annexed and terminated the kingdom in TA 1409. By this time, the Dúnedain were gone from the region, as well as most of the other inhabitants.[1]

There is evidence that after the fall of Angmar at the Battle of Fornost the Angle became home to the remainder of the Dúnedain, and the Rangers of the North established several villages there, where their people lived until the resurrection of the northern Kingdom under King Aragorn II Elessar at the end of the Third Age.[citation needed]

The name Rhudaur appears to be dialect Sindarin for 'East Forests'.[2]

The structure and details of Rhudaur are significantly fleshed out in the Middle-earth Role Playing game:

The Rhudaurians (S."Rhudaurim") were the inhabitants of the fallen kingdom of Rhudaur, in the closer sense those of númenorean blood, the Haeranedain, in a wider sense all those eriadorian tribes living inside the borders of Rhudaur including:

The Haeranedain were a bit smaller and darker than the high Dúnedain, although 6 ft for men was not uncommon.

In daily life most had adapted clothes much similar to those of the indigenous Hillmen, the Kailth, a skirt or kilt, and the Kullodoo.[citation needed]

The Lord of the Rings: The Battle for Middle-earth II

Rhudaur also makes an appearance in the expansion The Rise of the Witch-king to the game The Battle for Middle-earth II.

Rhudaur appears briefly in Peter Jackson's The Hobbit: The Desolation of Smaug (2013) as the location of the High Fells, where, in the film's continuity, the Nazgul were buried following their defeat by the Men of Arnor.

A village in Rhudaur, from The Lord of the Rings: The Battle for Middle-earth II 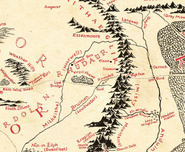 Translations around the world

Retrieved from "https://lotr.fandom.com/wiki/Rhudaur?oldid=243782"
Community content is available under CC-BY-SA unless otherwise noted.