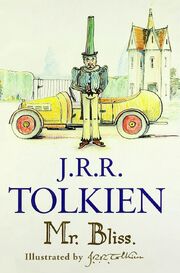 Mr. Bliss is a children's picture book by J. R. R. Tolkien, published posthumously in 1982. It tells the story of Mr. Bliss and his first ride in his new motor-car. Many adventures follow like encounters with bears, angry neighbors, irate shopkeepers and assorted collisions.

The story line was inspired by Tolkien's own vehicular mishaps with his first automobile. The bears were based on toy bears owned by Tolkien's sons. Tolkien was both author and illustrator of the book. His narrative binds the story and illustrations tightly together, as the text often comments directly on the pictures. Despite not being published during Tolkien's lifetime, he submitted the book to his publishers as a balm to readers who were hungry for more from Tolkien after the success of The Hobbit. The lavish ink and colored pencil illustrations would have made production costs prohibitively expensive so Tolkien agreed to redraw the pictures in a simpler style, although that never came to happen.

The book was eventually published in 1982, with Tolkien's difficult-to-read handwritten story and illustrations on one page, and a typeset transcription on the facing page.

Retrieved from "https://lotr.fandom.com/wiki/Mr._Bliss?oldid=259774"
Community content is available under CC-BY-SA unless otherwise noted.