The One Wiki to Rule Them All
Register
Don't have an account?
Sign In
Advertisement
in: Real World, Film Locations 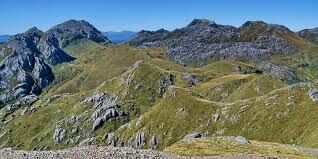 Mount Owen is the location in New Zealand which represented Dimrill Dale and Moria in the first film of Peter Jackson's The Lord of the Rings film trilogy, The Fellowship of the Ring. When the characters led by Aragorn leave Moria they emerge onto a rocky plateau. This was filmed on the slopes of Mount Owen.

Mount Owen is in the Tasman district of the South Island. It stands at 1875 metres (5625 feet) above sea level and is part of the Marino Mountains.

There are a number of caves in the marble karst areas on the flanks of the mountain, including New Zealand's longest cave system, Bulmer Cavern, which run for 64 kilometres[2]. Mount Owen lies within Kahurangi National Park. The Hope Saddle crosses its eastern flank.