watch 02:03
Wiki Targeted (Entertainment)
Do you like this video?
Play Sound

Middle-earth from Script to Screen:
Building the World of
The Lord of the Rings and
The Hobbit

Middle-earth - From Script to Screen: Building the world of The Lord of the Rings & The Hobbit is a comprehensive book recounting the making of Peter Jackson's The Lord of the Rings and The Hobbit film trilogies, in 1997 - 2002 and 2010 - 2014. It was written by Weta Workshop conceptual designer Daniel Falconer, with the help of writer K.M. Rice, and published in large hardcover in 2017 by Weta Workshop and Harper Design.

Middle-earth from Script to Screen contains hundreds of set and film archival images, and commentary from interviews with Peter Jackson, Dan Hennah, Grant Major, Alan Lee, John Howe, Tania Rodger, Richard Taylor, the cast of the trilogies, and others. At 511 pages, it is the largest guide to the making of the movie trilogies, and weighs 7.53 pounds.

I look at Middle-earth: From Script to Screen as a tour of the world Sir Peter Jackson and his team of filmmakers brought to the screen. It's a victory lap of Peter's vision of Middle-earth, exploring how the beauty and wonders of Tolkien's imagination were realised as a place people could witness on the big screen, visit in their minds, and believe in their hearts.
—Daniel Falconer, author

Chapters are ordered by regions of Middle-earth of significance in the films, from west to east, and cover the characters, set/prop efforts, and filming details pertaining to locations within. 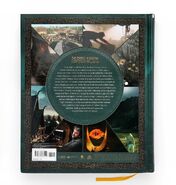 Retrieved from "https://lotr.fandom.com/wiki/Middle-earth_-_From_Script_to_Screen?oldid=260299"
Community content is available under CC-BY-SA unless otherwise noted.