The One Wiki to Rule Them All
Register
Don't have an account?
Sign In
Advertisement
in: Men, Men of Gondor
English

Of Men of Gondor there were two groups:

The Dúnedain of Gondor were the descendants of the Exiles of Númenor who settled in the south of Middle-earth, and there founded Gondor.

Middle Men had lived in the lands of Gondor before its official founding, and swore allegiance to its rule.

The cities of Gondor and provinces of Anórien, Ithilien, and Lebennin were mostly settled by the exiled Númenóreans, however in the southern fiefs dwelled many Middle Men of the White Mountains such as those of Lossarnach.

Being mostly of Númenórean stock and ruled by exiled Númenórean overlords, the Men of Gondor continued most of the customs and traditions of Númenór. However, over the centuries, they mixed more and more with the men of Middle-earth. One of these peoples was the Northmen who lived in Rhovanion, and Gondor, ever needing allies, began acquainting themselves with these men by the mid Third Age. Brave and valiant, but by the standards of the Dúnedain shorter lived, the Northmen gradually became closely aligned with Gondor, and one of the heirs to the throne, Valacar, who lived and worked with them in their own land as an ambassador, married one of their noble ladies, setting the stages for the Kin-strife. After this civil war Gondor's losses were replenished by a wave of migration of Northmen.

Over the next few centuries, war, rebellion, and plague severely weakened the Dúnedain in Gondor. Entering the late Third Age, the Men of Gondor were accustomed to war and invasion, becoming a hardy and stern people more like to the other Men of Middle-earth.

By the time of the War of the Ring, the Men of Gondor strove constantly against Mordor, holding the line of the Anduin river against the Shadow. Their leader Denethor II could foresee nothing but a victory in single combat on the battlefield against him or total doom, so when it became clear that Sauron's lost Ring of Power had been found, he and his son wanted the Ring to be taken by Gondor and be used against the enemy as a weapon. The Men of Gondor were spared the folly of this choice when Denethor's youngest son Faramir let Frodo and Sam continue to Mount Doom to destroy the One Ring.

After the war was won and Aragorn II Elessar was crowned, the Men of Gondor once more thrived and prospered as part of the Reunited Kingdom into the Fourth Age and beyond.[1][2] 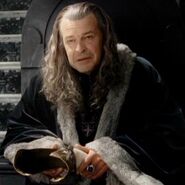