Lurtz was the first leader of the Uruk-hai scouts created specifically for Peter Jackson's movie The Lord of the Rings: The Fellowship of the Ring. He was portrayed by New Zealand actor Lawrence Makoare.

He is non-canonical as he was created for the films, and is not in the books.

Peter Jackson's The Lord of the Rings film trilogy

Lurtz was the first of Saruman's Uruk-hai to be bred, choking the first Orc he sees to death within seconds of his birth. Attempting to intervene, other Orcs (Snaga) move towards the newly born Uruk-hai warrior, but Saruman halts their advance, intrigued by the malice and violence present in the Uruk's blood, leaving the unfortunate Orc to its fate. He became Saruman's second-in-command, and led the first battalion of Uruk-hai into battle against the Fellowship of the Ring at Amon Hen.

In the books, Boromir was slain by Orc archers, described as having been "pierced by many arrows".[1] In the movie, he is killed by Lurtz, who shoots him three times in the shoulder, stomach, and chest after chasing the Fellowship to Parth Galen.

As his soldiers grab Merry and Pippin and leave the scene, Lurtz slowly approaches the wounded Boromir to finish him off, but Aragorn, who had heard Boromir's horn, intervenes and tackles Lurtz to the ground, and both begin a brutal fight. In the struggle, Lurtz's incredible ferocity and brutality appear to rival Aragorn's skill and resourcefulness, but after a dangerous bout, Aragorn manages to sever Lurtz's arm and decapitate him. Boromir dies minutes later, after speaking with Aragorn.

The duel between Lurtz and Aragorn was directed by producer Barrie Osborne.[2]

Of all Uruk-hai bred in Isengard, Lurtz was probably the smartest, and bravest, and the most capable leader. He is intelligent, extremely violent, and blindly loyal to Saruman. The only notable personality trait he displays is a high tolerance to pain, although he noticeably growls in pain when Aragorn stabs him through the leg with his dagger and when he pulls the dagger out of his leg, but doesn't feel it when his arm is sliced off. When stabbed through the stomach, he pulls the sword deeper into his body, closer to Aragorn to taunt him and in a last ditched effort to kill him - this shows that Lurtz has ultimate perseverance and tolerance for the odds.

He was a highly skilled swordsman who had an unorthodox, brute fighting style involving long-range attacks and close-range brawling moves. He held his own against Aragorn, managing to keep up with him for a period of time, landing several blows upon him and even making him bleed. However, he was eventually overpowered and slain by Aragorn due to the latter's superior skill and technique. Lurtz also had the skill of an archer.

Lurtz's name is never spoken aloud in the original film; it is only known from the franchise and credits. However, in the extended edition of the film, Lurtz's name is spoken by Saruman.

He made an appearance in The Lord of the Rings: The Two Towersvideo game as one of the bosses in the Amon Hen level.

Lurtz makes an appearance in the GBA Game The Lord of the Rings: The Third Age as a playable hero for the forces of evil.

Lurtz appears also in the PSP Game The Lord of the Rings: Tactics as a playable hero for the forces of evil.

In the LEGO game Battle of Helm's Deep, a Lurtz microfigure is presented, named "Uruk-hai Leader".

In LEGO The Lord of the Rings: The Video Game, there is a playable character actually named "Lurtz" along with his newborn variation obtained through obtaining 100% completion. In this game, Lurtz kills Boromir by throwing a banana in his chest.

The LEGO kit "The Orc Forge" includes the Lurtz minifigure, alone of all LEGO kits. 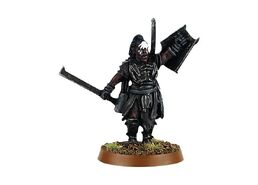 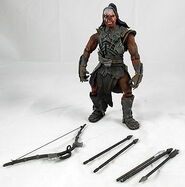 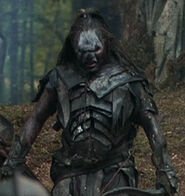