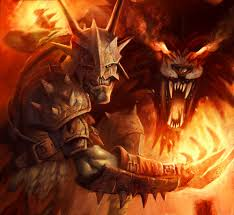 Once alive, a dark entity has possessed the Goblin once known as Lugbol, now a wight-like being who floats above the ground. Under his dark armor, Lugbol’s corrupted flesh courses with an evil energy, akin to the animating force of the dread Balrogs. Lugbol is able to channel the power that posses him into searing strikes of fire and lightning, and he laughs at physical attacks that turn harmlessly aside on his undead skin. Lugbol is a Wolf-friend, and calls upon those terrible beasts in times of need, or when his sorcery is not enough to turn the tides of a fight.

Retrieved from "https://lotr.fandom.com/wiki/Lugbol?oldid=159899"
Community content is available under CC-BY-SA unless otherwise noted.