A Dwarven kingdom of exiled members of Durin's Folk, once sacked by Smaug

The Lonely Mountain, known in Sindarin as Erebor, referred to both a mountain in northern Rhovanion and the subterranean Dwarven city contained within it. In the latter half of the Third Age, it became the greatest city in Middle-earth.

It was located northeast of Mirkwood, near the Grey Mountains, and was the source of the River Running.

Durin's Folk discovered the mineral wealth of the Lonely Mountain and the colony became the ancestral home of the King under the Mountain. By TA 1999, it had become a Dwarven stronghold, where the Dwarves became a numerous and prosperous people. In this time, they became very rich and amassed a large amount of gold and treasure which included the jewel known as the Arkenstone. Thrain I used the Arkenstone as a symbol of his rule, and his sons and grandsons under him who were to follow.

For two-hundred and eleven years the kingdom advanced, expanded, prospered, and endured until Thorin I abandoned it to join his kin in the Grey Mountains in TA 2210. The Lonely Mountain was abandoned for three-hundred and eighty years. However, the Dwarves of the Grey Mountains began to be attacked by the Dragons that still lived in those mountains, and became embroiled in a costly war against them, which forced the Dwarves to abandon the Grey Mountains in TA 2590. They went their separate ways: Grór and his followers settled in the Iron Hills, and Thrór with his followers went to the Lonely Mountain.[2]

While Thorin Oakenshield was out hunting one day in TA 2770, Smaug flew in from the northern mountains and attacked the Lonely Mountain. After laying waste to both Erebor and the neighbouring town of Dale, Smaug made the mountain his domain and hoarded the kingdom's wealth for himself. Thrór, Thráin II and several companions escaped through a Side-door. For many years thereafter the Dwarves lived in exile first in Dunland and then the Blue Mountains until, seemingly by chance, Gandalf met Thorin in Bree, where together they planned to reclaim the mountain.[3]

In TA 2941, Bilbo Baggins and Thorin's company traveled to the Lonely Mountain to regain the treasure Smaug had stolen. Set into the side of the mountain was a secret door, five feet high and wide enough for three to walk through abreast. Gandalf had managed to obtain the door's key, which fit a keyhole which could be found only when the setting sun and the last moon of autumn (also known as Durin's Day) would mingle their light upon the keyhole. It took many days to find the door, and luckily for Thorin and Company, they did not arrive on Durin's Day so they had plenty of time to enter the mountain.

Smaug was eventually slain, shot out of the sky by a well-aimed arrow at his only weak spot by Bard the Bowman, a man of Lake-town and a descendant of Girion, the last King of Dale. He was later declared king of the restored Kingdom of Dale. Thorin thus reclaimed the mountain, but the elves of Mirkwood and men of Lake-town sought a part of the treasure, which Thorin refused to share. Dáin II Ironfoot came to Thorin's cousin, and the three races almost broke into war, until a host of Orcs and wolves attacked, eager to break the strength of all three kingdoms. Dwarves, elves, and men, together with the Eagles, battled the Orcs in what became known as the Battle of Five Armies. During the battle, Thorin was mortally injured, and the titles of King under the Mountain and King of Durin's Folk passed to Dáin.

The demise of Smaug was not to be the last of the Lonely Mountain's many troubles. In TA 3019 on the 17th of March, a horde of Easterling soldiers from Rhûn swarmed over the Redwater river, opening up a second front in the northern theater of the War of the Ring. The Men of Dale fell back to the the protection of the Lonely Mountain.

The dwarves and men fought a pitched battle against the invaders, in which Dain and Brand, the then-King of Dale, were killed, though their forces eventually emerged victorious. The impenetrable gates and walls of the Lonely Mountain, buttressed and secured with advanced, complex, and resilient dwarven stonecraft and smithwork, easily withstood the siege equipment of the Easterlings. The many years spent improving the Lonely

Mountain's defences had paid off, and the Easterlings were unable to gain entry. Following the news of the destruction of the One Ring and the fall of Sauron, the Dwarves and Men of Dale sortied and routed the besieging army.

As Dáin was killed during the War of the Ring, lordship of Erebor passed to his son Thorin III Stonehelm, who ruled well into the Fourth Age. During this time, Dwarves from the Lonely Mountain helped rebuild cities in Gondor and the fortress of the Hornburg, and some went to the newly established Dwarven colony in the Glittering Caves where Gimli was lord.

In The Lord of the Rings Online, after a minor appearance depicting the Siege of Erebor, Erebor proper was added in 2018 as part of Eryn Lasgalen and the Dale-lands. After the breaking of the siege, it is now ruled by King Thorin III Stonehelm who must deal with some of the enemy's army still remaining near his lands. Other than the main hall of Erebor, players can also visit the living quarters, the burial tombs as well as several hidden chambers within the Mountain.

The Dwarves mining in Erebor, in The Hobbit films

The deep halls of Erebor 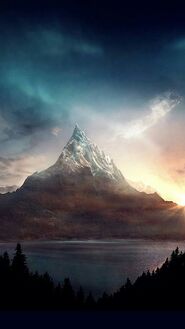 The mountain as it appears in The Hobbit film trilogy 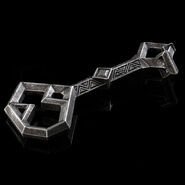 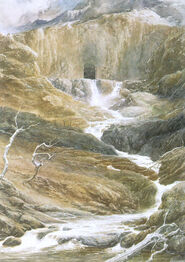 Erebor
Add a photo to this gallery

Retrieved from "https://lotr.fandom.com/wiki/Lonely_Mountain?oldid=269069"
Community content is available under CC-BY-SA unless otherwise noted.