Lawrence Makoare (born 20th of March, 1968) is a Maori actor who played three different roles in Peter Jackson's The Lord of the Rings trilogy: the Uruk-hai commander Lurtz in The Fellowship of the Ring, and the Witch-King of Angmar, and Orc general Gothmog in The Return of the King.

More recently, Makoare played the role of Bolg, the son of Azog, in The Hobbit: The Desolation of Smaug.

Makoare is popular among fans of Xena: Warrior Princess (which also co-starred Karl Urban and Manu Bennett), having played two major roles in the third season, and played the role of "Mr. Kil" in the James Bond film Die Another Day.

His last name is pronounced "ma-HO-re". 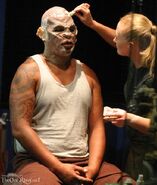 Lawrence's makeup as Gothmog
Add a photo to this gallery

Retrieved from "https://lotr.fandom.com/wiki/Lawrence_Makoare?oldid=237191"
Community content is available under CC-BY-SA unless otherwise noted.