The One Wiki to Rule Them All
Register
Don't have an account?
Sign In
Advertisement
in: Easterlings, Villains, Nazgûl,
and 8 more
English

Shadow of the East, The Black Easterling, Khamûl the Easterling

Lord of the Nazgûl, Lord of Rhûn

Khamûl was one of the nine Ringwraiths second to the Witch-king, in Middle-earth. During the Third Age, he held Dol Guldur as Sauron's lieutenant. After the Witch-king was slain, he became the Lord of Nazgûl for a short period.[2]

Khamûl was once a mortal man, an Easterling who ruled in Rhûn. He received one of the nine Rings of Power from the Dark Lord Sauron and in time he was corrupted and became one of his servants.

Khamûl was the wraith who pursued the hobbits to Bucklebury Ferry in the Shire, and who asked Farmer Maggot for "Baggins" just before Frodo Baggins left Hobbiton.[1]

Khamûl also appeared in the Battle of the Pelennor Fields with the other Nazgûl, mounted on his Fellbeast and killing Gondor's soldiers at the beginning of the battle. After the Witch-king´s demise, he and the other seven lesser Nazgûl retreated to Mordor.[6]

Afterwards, Khamûl became the leader of the Nazgûl. He led them to the Battle of the Black Gate riding his Fellbeast, before they were attacked by the Eagles. The Nazgûl retreated when Sauron sensed that Frodo claimed the One Ring for himself, and were dispatched to Mount Doom. He fell in the eruption's fire.[7]

Khamûl was called the Shadow of the East, the Second Chief, and the Black Easterling.[5] He was the only Ringwraith whose name was given by J.R.R. Tolkien, as well as one of the six Ringwraiths not of Númenórean descent.

In prior versions of the legendarium, Khamûl was stationed at Dol Guldur on March 6, when Aragorn revealed himself to Sauron and began marching on the Wood-elf realms on March 10th. On March 11th, his forces began assailing the nearby Lothlórien. After this failed, much of his force passed around the border of the woods and entered the Wold of Rohan. On March 12, they were met with Ents sent east from Fangorn and Isengard, and were routed. Lórien was then attacked twice more on March 15 and March 22, but was never entered. The forces of Dol Guldur also went north into Mirkwood, battling the forces of King Thranduil under Mirkwood's trees, the climax of these battles being on March 15, which after a "long battle... and great ruin and fire" was won by Thranduil's forces.

In Peter Jackson's The Lord of the Rings film trilogy, Khamûl is shown briefly when speaking to Farmer Maggot, who directs him onward to Hobbiton. Later, the Hobbits evade Farmer Maggot, but Frodo senses a presence and tells his friends to get off the road. Hiding behind a tree, the Hobbits hush as Khamûl approached, catching their scent. As the four stay quiet, Merry throws a sack of vegetables behind the Rider's horse, distracting Khamûl and allowing the Hobbits to escape.

In The Return of the King, after the Ring was destroyed, Khamûl died along with the seven other Ringwraiths in the eruption of Mount Doom, the Witch-king having perished earlier during the Battle of the Pelennor Fields.

In the The Hobbit film trilogy, the nine Ringwraiths had been buried in the High Fells of Rhudaur, but emerged at the summons of the Necromancer, who is revealed to be Sauron. In The Hobbit: The Battle of the Five Armies, Khamûl and the other eight Ringwraiths engage the White Council in battle, with Khamûl wearing spectral Easterling armor. 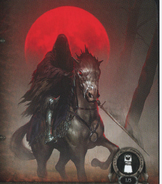 Khamûl as seen in The Lord of the Rings: The Card Game - A Shadow in the East Expansion 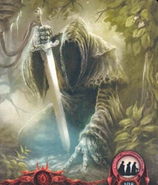 Khamûl as seen in The Lord of the Rings: The Card Game - The Black Riders Nightmare Pack

Khamûl models from The Lord of the Rings Strategy Battle Game