"We wish for no strangers in the land at this time, unless they be mighty men of arms in whose faith and help we can trust."
—The Return of The King, "Minas Tirith"

Ingold was a Man of Gondor and a soldier of the realm. 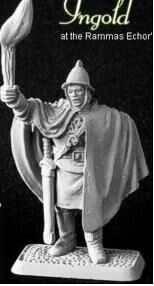 During the War of the Ring, he was the leader of the soldiers guarding the northern gate of the Rammas Echor as it was being repaired just before the start of the Siege of Gondor. He permitted Gandalf and Pippin through the gate, having recognized the wizard immediately, but he enquired after Pippin's business in Minas Tirith as Gondorians of the time did not trust foreigners and Halflings were almost completely unknown to him, aside from the one mentioned in Boromir's dream.[1]

Days after Gandalf had passed, an army out of Mordor crossed the river Anduin from the east and descended on Ingold's position. He retreated with those of his men who survived back to the city, reporting that the northern road had fallen into the hands of the enemy. This was woeful news in Minas Tirith, because it was thought to mean that the Rohirrim could not come to their aid (though in fact the Riders were able to find another route, the long-forgotten Stonewain Valley).[2]

Other versions of the legendarium

In earlier writings, Ingold was the name of Aragorn and the Elfstone.[4][5]

In The Lord of the Rings Online Ingold is first met defending the northern gate of Rammas Echor when the wallis already besieged by the Morgul host. He tasks the player with slowing the enemy's advance and repelling the attacks on the wall, but eventually retreats to Minas Tirith along with his men. Ingold survives the Battle of the Pelennor Fields and joins the Host of the West on the march towards the Black Gate. After the downfall of Sauron he becomes part of Gondorian army tasked with entering the Black Land and dealing with the evil that remains within. Ingold and his men establish a camp in the ruins of Díngarth, an ancient Gondorian keep on the plain of Dol Amarth, from which they make several incursions to the ruins of Barad-dur, which are found to be neither empty nor free of danger. After King Elessar charges Steward Faramir with cleansing the evil of Minas Morgul, Ingold and his men traverse the plateau of Gorgoroth and enter the Morgul Vale from the east.

Translations around the world

Retrieved from "https://lotr.fandom.com/wiki/Ingold?oldid=259476"
Community content is available under CC-BY-SA unless otherwise noted.