The One Wiki to Rule Them All
Register
Don't have an account?
Sign In
Advertisement
in: Lords of Gondor, Dúnedain, Men of Gondor,
and 3 more
English

Imrahil, also known as Prince Imrahil, was the twenty-second Prince of Dol Amroth. He had two older sisters, Ivriniel and Finduilas. His daughter Lothíriel wedded Éomer, King of Rohan, in the last year of the Third Age.

Born in TA 2955, Imrahil was the only son of Adrahil, twenty-first Prince of Dol Amroth. He succeeded to the fief at the death of his father in TA 3010. Married to an unknown wife, he had three sons, Elphir, Erchirion and Amrothos and a daughter, Lothíriel. It was said of him that:

'Here indeed was one who had elven-blood in his veins' and 'If Gondor has such men still in these days of fading, great must have been its glory in the days of its rising'.[1]

During the War of the Ring, on March 9, TA 3019, Prince Imrahil led a company of Swan Knights and 700 men at arms to Minas Tirith to help defend the city. Prince Imrahil led the sortie that rode to the aid of Faramir and the rear-guard who were retreating from Osgiliath when the forces of Sauron overran the Pelennor Fields on March 13. Gandalf rode with them, and the Winged Nazgûl fled before him. The Knights of Dol Amroth rescued Faramir from the Southrons but he was poisoned, and Imrahil carried his nephew back to Minas Tirith on his horse. Gandalf then took command of the besieged city, and Prince Imrahil assisted him because Denethor in his madness retreated to the White Tower with his dying son, paying no further attention to the city's defence.

During the Siege of Gondor, Imrahil and Gandalf made circuits of the Othram, bolstering the defenders before taking command of the defence of the Great Gate. On March 15th, with the arrival of Rohan, the defenders proceeded to sortie from the city to link up with them, with Imrahil leading the attack in the Battle of the Pelennor Fields.

While paying his respect to the procession bearing the body of King Théoden of Rohan, Imrahil noticed that the Rohirrim also bore the body of Éowyn. He perceived that she was still alive and he sent her to the Houses of Healing.

Éomer and his Riders were outnumbered, but Imrahil then rode into battle and came to their aid. Shortly after, Aragorn arrived in the black ships of the Corsairs and the tide of the battle was turned. After the Pelennor Fields had been cleared, Aragorn, Éomer and Imrahil rode to the Gate of Minas Tirith.

Imrahil recognized that Aragorn was the rightful King of Gondor, but he agreed that it was wise for Aragorn to wait to enter the city because Imrahil knew his brother-in-law Denethor was strong-willed and proud. When Imrahil learned that Denethor was dead and Faramir was dying, he suggested that Aragorn be summoned, remembering that the kings of old were great healers. Aragorn came at Gandalf's request to heal the wounded Faramir, Éowyn, and Merry, but he declared that Prince Imrahil should rule the city until Faramir awoke.

During the debate of the Captains of the West, Gandalf proposed that they march to the Black Gate to distract Sauron's attention from Frodo the Ring-bearer. Imrahil said that he would follow his liege Aragorn, but since Minas Tirith was under his command the Prince advised that some should remain to defend the City. In the end it was decided that an army of 7,000 would ride forth. Imrahil laughed and said:

"Surely this is the greatest jest in all the history of Gondor: that we should ride with seven thousands, scarce as many as the vanguard of its army in the days of its power, to assail the mountains and the impenetrable gate of the Black Land! So might a child threaten a mail-clad knight with a bow of string and green willow!" (The Return of the King: "The Last Debate")

The Army of the West left Minas Tirith on March 18. Bypassing Minas Morgul and marching north, the heralds announced the coming of King Elessar at Imrahil's suggestion. When Sauron's forces emerged from the Black Gate on March 25, Imrahil stood on the front line with his men. They fought the Battle of the Black Gate until the One Ring was destroyed.

Prince Imrahil was present at the celebrations of the Field of Cormallen, and the coronation of Aragorn as King Elessar, and rode with the funeral procession of King Théoden to Rohan, remaining in Edoras after the King's burial on August 10. Imrahil and Éomer became great friends, and in TA 3021 Éomer wed Imrahil's daughter Lothíriel.[2]

After the War of the Ring, Prince Imrahil and his nephew Prince Faramir were King Elessar's chief commanders. Imrahil was also part of the Council of Gondor, and remained an adviser of the King.

Prince Imrahil died in the year 34 of the Fourth Age, and was succeed by his eldest son Elphir, who continued the line of Princes.[3]

Prince Imrahil in The Lord of the Rings Online 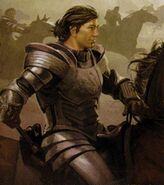 Prince Imrahil from The Lord of the Rings: The Card Game, A Journey to Rhosgobel Adventure Pack 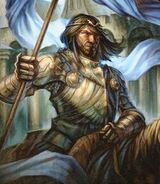 Prince Imrahil from The Lord of the Rings: The Card Game, The City of Corsairs Adventure Pack 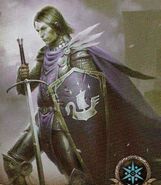 Prince Imrahil from The Lord of the Rings: The Card Game, The Flame of the West Expansion