Hláfwine was an old sailsman who lived in Rohan. 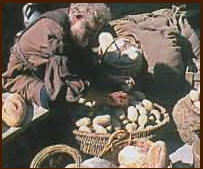 During the War of the Ring, Hláfwine took refuge in Helm's Deep along with many others. He was rather plump, and his job was selling potatoes and eggs to the people of Rohan. Later, he was among those that were forced to fight and defend the Hornburg from an army of 10,000 Uruk-hai that were dispatched by Saruman to march towards Helm's Deep. It is unknown if he survived, but its possible that he was one of the combatants that were killed during the battle of Helm's Deep.[citation needed]

Retrieved from "https://lotr.fandom.com/wiki/Hl%C3%A1fwine?oldid=236804"
Community content is available under CC-BY-SA unless otherwise noted.