The One Wiki to Rule Them All
Register
Don't have an account?
Sign In
Advertisement
in: Rohan, Valleys, White Mountains
English

Helm's Deep, named for Helm Hammerhand, was a fortified gorge in the White Mountains located below the Thrihyrne. It lay near the Westfold and was the location of the Hornburg.[1] It was later made famous by the Battle of the Hornburg, a major battle of the War of the Ring.

The gorge narrowed from the north, with the cliffs on each side heightening until its southernmost point, where the fortress of the Hornburg and the source of the Deeping-stream lay. The Hornburg was built upon a great spur of rock which extended from the gorge's northern cliff, and from the fortress to the southern cliff was built the Deeping Wall. The earthen wall known as Helm's Dike spanned the width of the gorge, acting as a first defense of the fortress.

Behind the Hornburg was located the Glittering Caves, which were renowned for their beauty.[1]

Helm's Deep was first known to be settled by the Men of Gondor, who constructed the Hornburg during the Second Age. When Calenardhon was given by Gondor to the Éothéod during the rule of Eorl the Young, it became a stronghold of the Rohirrim.[2]

During the Long Winter of TA 2758-2759, Helm Hammerhand and a contingent of Rohirrim soldiers took shelter in the Súthburg. It was at this time that the gorge and fortress name were taken from Helm and his horn.[2]

In the year TA 3019, during the War of the Ring, King Théoden of Rohan led the people of Edoras to the Hornburg to take refuge from the impending attack of Saruman's army. It was then that the Battle of the Hornburg was fought, which ended in victory for Rohan after Erkenbrand and Gandalf arrived with reinforcements.[1] Following the beginning of the Fourth Age, Gimli founded a dwarven colony in the Glittering Caves, becoming Lord of the Glittering Caves for a time.[3] 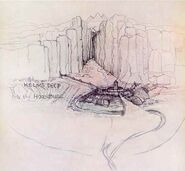 Helm's Deep and the Hornburg, drawn by J.R.R. Tolkien