Gwaihir, also known as Gwaihir the Windlord, was lord of the Great Eagles during the Third Age.

Gwaihir was descended from Thorondor, the greatest Eagle who ever lived. It was said that he and his brother Landroval aided Thorondor in rescuing Beren and Luthien from Angband.[1]

At some point in his life, Gandalf the Grey saved him from a poisoned arrow.

In the summer of TA 3018, Gandalf asked Radagast the Brown to send word among his friends the birds to learn what they could of the Enemy's plans. The Great Eagles flew far and wide and gathered news of the Nazgûl, the muster of Orcs and Wargs, and the escape of Gollum from Mirkwood.

Gwaihir went to Isengard to bring this news to Gandalf. In the early hours of September 18, he found Gandalf imprisoned by Saruman on the pinnacle of Orthanc. Gwaihir bore Gandalf away, and when the wizard said that he needed a horse, Gwaihir set him down in the land of Rohan.

On February 17, 3019, Gwaihir was searching for Gandalf at the request of Galadriel when he found the wizard atop the Silvertine. Gandalf had vanquished the Balrog in the Battle of the Peak, but the entrance to the Endless Stair had been blocked, preventing him from escaping the mountaintop. Gwaihir once again bore Gandalf; he found his burden to be as light as a feather, for Gandalf's old life had been burned away, and he had been reborn as Gandalf the White.

Gwaihir brought Gandalf to Lothlórien, and then at the wizard's request he flew to seek news of the Fellowship. Aragorn and Legolas both saw him circling above the Emyn Muil. Gwaihir returned to Gandalf with the news that Merry and Pippin had been kidnapped by Saruman's Uruk-hai.

Gwaihir and his brother Landroval led a great company of Eagles to the Battle of the Black Gate on March 25, 3019. They swooped in to attack the winged Nazgûl, but the Nazgûl fled when Sauron summoned them to fly to Mount Doom where Frodo Baggins stood at the Cracks of Doom with the Ring. After the Ring was destroyed, Mount Doom erupted and Frodo and Sam were stranded on a hill amid flowing lava and falling ash. Gandalf asked Gwaihir to bear him a final time. Accompanied by Landroval and Meneldor, Gwaihir flew swiftly to Mount Doom; with his keen sight, he spotted the Hobbits through the fumes. The Eagles lifted Frodo and Sam and bore them away to safety.

The name Gwaihir comes from the Sindarin terms gwaew ("storm, wind") and hîr ("lord, master"), translating his name to "Wind-lord".[2]

Gwaihir had keen eyesight and was the swiftest of the Great Eagles. He was large and strong enough to carry a grown man, though he could not do so not indefinitely.

Other versions of the legendarium

In earlier versions, his name was "Gwaewar" and he was Thorondor's (then leader of the Great Eagles) vassal. As Gwaewar, he was called the "Lord of the Wind".[3] He was also among the Eagles present to save Beren and Lúthien from Angband.[4]

In TA 2941, a character called "Lord of the Eagles" saved Thorin and Company from Wargs and Orcs. He later arrived in the Lonely Mountain and fought in the Battle of Five Armies.[5]

However, it is up for debate if Gwaihir was one of the eagles that saved Thorin and Company. In the whole of The Lord of the Rings Gwaihir carries Gandalf twice, and by the end of the book Gandalf says so [6]; this implies that Gwaihir had not borne him before the years of The Fellowship of the Ring.

In the 1977 animated version of The Hobbit, though not confirmed, many fans speculate that the Lord of the Eagles is Gwaihir; he is voiced by Don Messick.

In The Fellowship of the Ring, Gwaihir arrives at Isengard to rescue Gandalf. Later in The Return of the King, Gwaihir, Landroval, and the other Great Eagles arrive at the Battle of the Black Gate and attack the Nazgûl and their Fellbeasts. After the destruction of the One Ring, Gwaihir bears Gandalf and rescues Frodo and Sam from the rocks of Mount Doom.

In the Hobbit Trilogy, Gandalf uses a moth to call Gwaihir and the other Great Eagles to help them escape Azog and his hunters. Later, Radagast rides Gwaihir during the Battle of the Five Armies after seeking his aid along with an army of Great Eagles.

Gandalf the Grey being escorted to Rohan by Gwaihir; after being rescue from Isengard 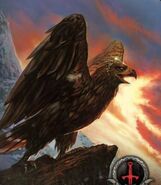 Gwaihir from The Lord of the Rings: The Card Game, Trouble in Tharbad Adventure Pack

Gwaihir from The Lord of the Rings: The Card Game, The Land of Sorrow Adventure Pack

Gwaihir from The Lord of the Rings: The Card Game, The Mountain of Fire Expansion