Orcs of the Misty Mountains

"He wields the Foe-Hammer! The Beater, bright as daylight!"
—The Great Goblin upon seeing Gandalf's sword, Glamdring

The Great Goblin was a large Goblin leader who lived in the Misty Mountains in Middle-earth during the Third Age. He appears only in The Hobbit.

The Great Goblin was a Goblin chieftain of the Misty Mountains. He was a very large creature with a huge head. He was the chief of a group of goblins who lived in Goblin-town near the High Pass. They preyed on travellers who used another, easier pass near the main gate of Goblin-town until people started avoiding that route over the mountains. The goblins then made another gate that opened into a cave that they called the Front Porch, at the top of the High Pass. The Great Goblin also sometimes ordered his goblins to catch fish for him in Gollum's Lake, and these goblins were sometimes killed by Gollum.

In the summer of TA 2941, the Dwarves of Thorin and Company, along with Bilbo Baggins, were captured on the Front Porch and were brought before the Great Goblin in his great cave, where he was seated on a flat stone and surrounded by armed guards. The Great Goblin demanded to know what the Dwarves were doing in the mountains. (He seems less hostile in this passage than the Orcs are during the later War of the Ring, as his questioning seems to imply that he has not decided beforehand whether he will order the party killed, make them slaves, or even let them go, but that he will decide according to their answers. It is also possible he was just toying with the group and would kill them afterwards.)

When it was revealed that Thorin carried the Elvish sword Orcrist - which the Orcs and goblins fear and which they called "Biter" - the Great Goblin was enraged and at once leapt to attack Thorin. Immediately, all the torches in the cave were extinguished and a glowing sword "bright as blue flame" appeared. It was Glamdring, called "Beater" by the goblins, and now wielded by Gandalf. As the Dwarves were escaping, the Great Goblin leapt down in front of them, and attacked Gandalf who was at the head of the party. Gandalf then fought back, stabbing the Great Goblin and killing him.

The death of the Great Goblin angered the goblins of the Misty Mountains. A great army of goblins and Wargs was amassed by Bolg, whose father Azog had been killed by the dwarf Dáin II Ironfoot. Bolg's forces tracked Thorin and Company to the Lonely Mountain where they fought in the Battle of the Five Armies against the Dwarves, Elves, and Lakemen.[2][3]

In the 1977 Rankin/Bass version of The Hobbit, the Great Goblin was voiced by John Stephenson. (The Hobbit)

"Well, well, well! Look who it is; Thorin, son of Thrain, son of Thror, "King under the Mountain". Oh, but I'm forgetting; you don't have a mountain, and you're not a king, which makes you... nobody, really."
—The Great Goblin, taunting Thorin Oakenshield

"Bones will be shattered, necks will be wrung! You'll be beaten and battered, from racks you'll be hung! You will die down here and never be found! Down in the deep of Goblin-Town!"
—The Great Goblin's song in The Hobbit: An Unexpected Journey

In Peter Jackson's film The Hobbit: An Unexpected Journey (2012), Barry Humphries, who is more commonly known for his alter ego Dame Edna Everage, is the voice and motion-capture performer of the Great Goblin, an entirely computer-generated character. He appears as a giant, obese, bloated goblin with lots of warts, lumps, and scars, and carries a large staff decorated with an animal skull, closely resembling a ram, adorned with shrunken heads.

His death is portrayed quite differently from the book. In the film, he is knocked off a cliff by Thorin when Gandalf saved the company, and is killed after the fight through Goblin Town when Gandalf slashes his abdomen and cuts his throat, and then his corpse falls on to the company at the bottom of the cavern. (The Hobbit: An Unexpected Journey) 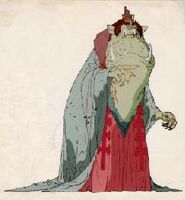 The Great Goblin as portrayed in the 1977 film. 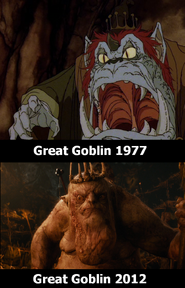 A comparison of old and new portraits by Raynaldo 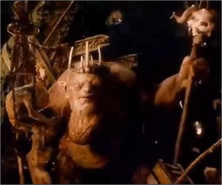 The Great Goblin talking to his royal scribe.

The Great Goblin after being slashed across his stomach by Gandalf. 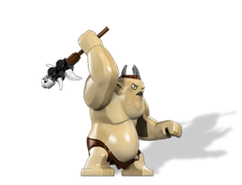 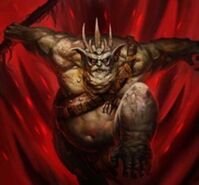 The Great Goblin in Guardians of Middle Earth 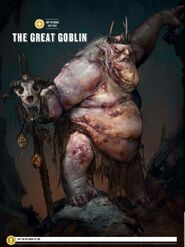 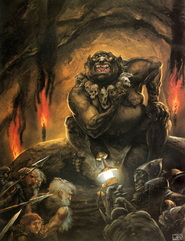 Great Goblin, by John Howe.
Add a photo to this gallery

Retrieved from "https://lotr.fandom.com/wiki/Great_Goblin?oldid=155928"
Community content is available under CC-BY-SA unless otherwise noted.