The One Wiki to Rule Them All
Register
Don't have an account?
Sign In
Advertisement
in: Rohirrim, Villains, Agents of Saruman,
and 7 more
English

Counselor to Théoden, spy of Saruman

"Late is the hour in which this conjurer chooses to appear. Láthspell I name him. Ill news is an ill guest."
—Gríma Wormtongue to Gandalf, in The Two Towers

Gríma Wormtongue was the chief counsellor at the court of King Théoden of Rohan before being exposed as an agent and mole of the corrupted Wizard Saruman. Reduced to the level of a base thrall, he ends up as the slayer of his oppressive master in the last climactic chapter of The Return of the King.

Little is known of Gríma before he became advisor of King Théoden in Edoras. His childhood is a mystery. What is known is that Gríma, son of Gálmód, and a native of Rohan, was covertly tempted into the employ of the Wizard Saruman and began working as his spy, informing of every notable development throughout the kingdom, as well as weakening the ailing king's mind and body with his deceitful counsels and subtle poisons administered as remedies for old age.

It is likely that Saruman had promised him Éowyn, the king's niece, as a reward for his services; Wormtongue is accused of "watching her under his lids and haunting her steps." It is also possible that he had Dunlending ancestry, since he was darker-haired and physically smaller than the other Rohirrim.

After Gandalf ended Gríma's control of Théoden and released the King, "many things which men had missed" were found locked in his trunk, including Herugrim, the blade of Théoden. With his betrayal revealed, Théoden presented Gríma with a choice: either ride into battle for the King or be exiled. Choosing the latter, he went to dwell with Saruman at Orthanc. Arriving there after the Ent attack, Gríma was captured and imprisoned by the Ents in Orthanc with Saruman. Later, Saruman had cause to regret Gríma's dwelling in Orthanc when, following the confrontation between Saruman and Gandalf, he foolishly threw a "heavy rock"— which was actually the palantír of Orthanc at either Gandalf or Saruman (it is stated that "he couldn't decide which he hated most"), an act for which Saruman seems to have punished him severely (Pippin picked up the palantír). Saruman was also said to have scalped Gríma and beaten him over time.[1]

Gríma then accompanied Saruman to the Shire, where the two sought revenge in petty tyranny over the hobbits (though Saruman had already been exerting control from afar by sending evil Men to the Shire). During this time, Gríma became increasingly degraded until he was a crawling wretch, a beggar, almost resembling Gollum, and Saruman shortened his nickname to "Worm". Gríma killed Lotho Sackville-Baggins and may have eaten him, which he claimed to have done under Saruman's orders.

Spurred by the words of Frodo that he did not have to follow Saruman, and having been pushed over the edge when Saruman scorned him, Gríma used a hidden knife to slit Saruman's throat, killing him. He then tried to make his escape, but was quickly killed by several arrows fired from the hobbits present, ending his short and unhappy life.[2]

Gríma actually played a major role in the story of The Lord of the Rings prior to his first appearance in The Two Towers. In Unfinished Tales, Tolkien writes that on September 20 in 3018 Gríma was captured by the Nazgûl in the fields of Rohan, while on his way to Isengard to tell Saruman of Gandalf's arrival at Edoras. He was interrogated and divulged what he knew of Saruman's plans to the Nazgûl, specifically his interest in the Shire and its location, revealing the Wizard's two-facedness towards the Dark Lord Sauron. Previously, the location of the Shire had been unknown to the Nazgûl, but they knew it to be the home of "Baggins," whom they thought still had the Ring.

Wormtongue was set free, for the Lord of the Nazgûl saw that he would not dare tell anyone of their meeting and he guessed that he would be of much use to the Dark Lord (being a capable opportunist), while doing harm to the turncoat White Wizard in the future. The Nazgûl set out immediately for the Shire. Had the Ringwraiths not captured Gríma, they would instead have pursued Gandalf into Rohan, and possibly not have found the Shire until much later, giving the Hobbits and then the Fellowship of the Ring a considerable head start.[3]

In Ralph Bakshi's 1978 animated film of The Lord of the Rings, Gríma Wormtongue was voiced by Michael Deacon (and his name is pronounced as "Gree-ma"). Here he is much smaller than is implied in the book. Paul Brooke played Gríma in BBC Radio's 1981 serialisation.

In Peter Jackson's Lord of the Rings films, Gríma was played by Brad Dourif.  Here, he is depicted as dark-haired, emaciated and eyebrowless, wearing black robes with dark fur, as well as being extremely pale and gaunt (the only detail coming from the book). According to Dourif, Jackson encouraged him to shave off his eyebrows so that the audience would immediately have a subliminal reaction of unease to the character.

A number of details are different compared with the books. Gríma banishes Éomer entirely from Rohan, compared to his arrest in the books. When Gandalf frees Théoden, the king nearly kills Gríma until Aragorn intervenes. Gríma then spits on Aragorn's hand and flees, arriving in Isengard to give Saruman vital intelligence of Théoden's movements. Additionally, he also leads the Wizard to uncovering the existence of the Heir of Isildur, which, though deemed of no importance to his campaign against Rohan, would find its way to the ear of the Dark Lord Sauron.

The "Scouring of the Shire" storyline does not appear in the film version, so the deaths of Saruman and Gríma were moved to an earlier scene, "The Voice of Saruman". This scene was cut from the theatrical releases of the films, but can be found on the Extended Edition DVD of The Return of the King.

In this scene, the assembled leaders of the West ride to Ent-occupied Isengard to confront Saruman. Théoden offers to forgive Gríma for his treachery, pointing out that he was not always a villain, as he was manipulated by Saruman (as Théoden himself was). Gríma goes to accept the offer, attempting to escape Saruman's cruelty, but Saruman interferes, claiming that Gríma belongs to him forever. When Gríma objects, Saruman slaps him violently to the ground. Enraged at being constantly ill-treated by his enslaver, Gríma rises and stabs Saruman twice in the back with a dagger. Saruman's body then falls from the tower and is impaled on a spiked wheel, a remnant of his war machines, and the palantír slips out of his cloak. Gríma himself is shot with an arrow fired by Legolas, who had hoped to prevent him from killing Saruman (who was in the process of revealing vital information). He dies of his wound.

Other than the location, the manner of the characters' deaths is very much the same. As in the book, Gríma slays Saruman, but does so by stabbing him in the back, not by slitting his throat (probably because this would have been too graphic for a PG-13 movie), and is then shot with an arrow by Legolas (in the book, a hobbit). This scene was to have included a line where Saruman blamed Gríma for killing Théodred; replacing Lotho in the context of that scene, but the line was cut out. However, the line is included in a scene in the The Lord of the Rings: Gameboy Advance version of The Lord of the Rings: The Two Towers after the player defeats Saruman in the Tower of Orthanc.

Gríma Wormtongue from The Lord of the Rings Online. 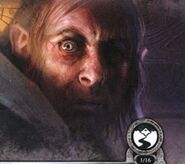 Gríma from The Lord of the Rings: The Card Game, The Voice of Isengard Expansion 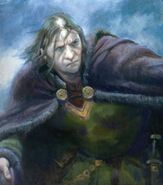 Gríma (Hero) from The Lord of the Rings: The Card Game, The Voice of Isengard Expansion 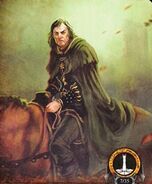 Gríma Wormtongue (Enemy) from The Lord of the Rings: The Card Game, The Treason of Saruman Expansion