"Bow before me, vermin!"
—Gorkil

He and his armies took control of the abandoned outpost in the Ettenmoors in Angmar, formerly owned by the Witch-king of Angmar. Sauron uses Gorkil to control the goblins and serve his will. He also owns and raised a rare, gigantic scorpion.

Gorkil was killed at the Ettenmoors by Glorfindel of Rivendell, Haldir of Lothlórien, and Gloin, father of Gimli. When he died, his goblins were lost and confused, and Sauron's hold over them was broken.

In Mission 2 of the Evil Campaign, Gorkil arrives soon after the Corsair Armada lands upon the far beach of the Grey Havens. With his Goblins, Half-trolls, and Corsairs, he eliminates any Ents and Elves that attempt to make a defense. After they are destroyed, Gorkil creates a base and marches upon the Grey Havens. More Elves try to stop them, but like the warriors of the Beach defense, all are again slain. When the Goblin Army arrives upon the Grey Havens, Gorkil commands it to destroy every building and elf in the area. Gorkil leads the destruction to two of three Elven fortresses, while Corsair ships destroy the third. The Grey Havens are utterly destroyed and the Elves flee into the woods, their hopes of escaping to the west gone forever. Gorkil and his army then heads to the Shire, ready to settle an ancient feud.

In Mission 3, Gorkil prepares his army to destroy the Shire. A previous goblin, Golfimbul, had attempted to attack the Shire but was killed. This Battle of Greenfields was still deep in the minds of the Goblins, and now Gorkil prepares to settle the score once and for all. Gorkil commands his troops to destroy four Seats of Power, which keep the Hobbits motivated to retaliate. After building a base and mustering an army, they get help from the Wild Men of Dunland and Mountain Giants. Gorkil and his army destroys all the Hobbits and all the Dúnedain in the area, destroying the Four seats of power and conquering buildings like The Green Dragon Inn and Farmer Maggot's orchard. Soon after the seats of power are destroyed, Wormtongue and an army of Uruk-hai arrive to attack the Goblins and take the Shire for their own. He is killed by the Goblins, however, and the Uruk-hai break away in confusion and disarray. The Shire is now Gorkil's, and any Hobbits that survived the attack will be slain soon enough.

In Mission 4, Gorkil and his Goblin Army prepares to attack the mighty city of Fornost. The Dwarves of the Blue Mountains and most of the surviving Dúnedain are gathered here, and Gorkil prepares to destroy them and take the city for his own. After preparing his mighty army, Gorkil sends Cave-trolls and Mountain Giants to destroy both the main gates and postern gates hidden in the eastern part of the wall (assume that north is up, south is down, east is right, and west is left). Though many fall to the Dúnedain arrows and Dwarven Catapults, these structures are soon destroyed and the outer defenses crushed. With inner Fornost left, the Dwarves prepare a mighty Earth Hammer, but the Goblins invade and destroy this weapon of mass destruction before it activates. They then proceed to the Fornost Citadel, crushing it to pieces. The remaining defenders are all slain soon after, and the lands west of the Misty Mountains are now free for Sauron to control. Gorkil does not play an activate role again until Mission 8, the Fall of Rivendell.

In Mission 8, Gorkil arrives at the woods just outside of Rivendell. He has received word that Sauron has returned, that Frodo has fallen at Mount Doom, and that he must begin the assault on Rivendell. He brings him a mighty army to destroy the outer defenses of Rivendell. Glorfindel and several Rivendell Lancers ride out in an attempt to destroy the Goblins, but the Half-Troll Marauders and Gorkil's scorpion are more than a match, and all the elf riders (including Glorfindel) are slain. After capturing an outpost for extra resources, Gorkil and his army destroy the outer battle towers and Mirkwood Archers that guard Rivendell's front gate. With the help of many Mountain Giants, Rivendell's front gate is destroyed.

After the gate is destroyed and the forces of Mordor (including Sauron) arrive, Gorkil gives control of the invasion to the Dark Lord and becomes one of his lieutenants. Combining his Goblin army with that of Mordor, the mighty armies lay waste to all of Rivendell, killing Elrond and Arwen in the process. While the attack is occurring, the Fellowship of the Ring (minus Sam and Frodo, who apparently fell at Mount Doom) arrives with the Army of the Dead, but the Dead soon disappear and all Fellowship members are slain. Sauron, Gorkil, and his fellow lieutenants (including Drogoth, Shelob, three Nazgûl, two Fell-Beast Riders, the Witch-king of Angmar, and the Mouth of Sauron) turn their attention back to Rivendell, and finish destroying the last remnants of Rivendell. Rivendell has fallen, and darkness now covers Middle-earth forever.

Gorkil is described as a proud and bold, yet extremely ruthless, impatient, cruel, power hungry and temperamental leader to the Goblins. He holds his subjects in extremely low regard and often chastises them whenever he's angry or is displeased with their results. However, he does take great pride in them whenever they serve him well, mainly when it comes to winning important battles and maintained a odd sense of charisma that inspired his subjects to follow him with loyalty. Despite his alliance with Mordor, Gorkil has no loyalty to Sauron as the Goblin King puts his own ambitions and goals over even his alliance with the Dark Lord. This was best shown when he was willing to kill Grima Wormtongue and an army of Uruk-hai when they interfered with his campaign against the Shire, despite being allies.

Gorkil the Goblin King as seen in the Shire mission.

Former goblin king leading the Goblins into the Shire years before Gorkil.

Gorkil marching into the battlefield with his mount in a widescreen screenshot from Battle for Middle-Earth II.

Gorkil mounted on his scorpion mount. 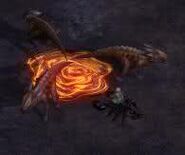 Gorkil's massive army of goblins approaching into the Shire.
Add a photo to this gallery

Gorkil the Goblin King at The Wiki for Middle-earth

Retrieved from "https://lotr.fandom.com/wiki/Gorkil_the_Goblin_King?oldid=254949"
Community content is available under CC-BY-SA unless otherwise noted.