The One Wiki to Rule Them All
Register
Don't have an account?
Sign In
Advertisement
in: Kinds of Orcs, Races, Goblins
English

"Orc is not an English word. It occurs in one or two places [in The Hobbit] but is usually translated goblin (or hobgoblin for the larger kinds)."
—J.R.R. Tolkien, Preface to The Hobbit

"Goblins" are what J.R.R. Tolkien called the Orcs whom Thorin and Company encountered in The Hobbit. They lived deep under the Misty Mountains in many strongholds, ever since the War of Wrath in the First Age. Tolkien described them as big, ugly creatures, "cruel, wicked, and bad-hearted." Tolkien explained in a note at the start of The Hobbit that he was using English to represent the languages used by the characters, and that goblin (or hobgoblin for the larger kind) was the English translation he was using for the word Orc, which (he wrote) is the hobbits' form of the name for them. Tolkien used the term goblin extensively in The Hobbit, and also occasionally in The Lord of the Rings, as when the Uruk-hai of Isengard are first described: "four goblin-soldiers of greater stature".

A clear illustration that Tolkien considered goblins and orcs to be the same thing, the former word merely being the English translation of the latter, is that in The Hobbit (the only one of Tolkien's works in which he usually refers to orcs as goblins) Gandalf asks Thorin if he remembers Azog the goblin who killed his grandfather Thror [1], while in all his other writings Tolkien describes Azog as a "great Orc".[2]

When Melkor was taken in chains to Valinor, the Orcs and other foul creatures were forced to flee from Angband. Their kingdoms spread throughout many mountains of Middle-earth; notable cities include Goblin-town near the High Pass above Rivendell, the Goblin-capital at Mount Gundabad, and the former Dwarf-kingdom of Moria, as well as those in the service of Isengard and Mordor.

Even though goblins are portrayed as a very barbaric and tribal race their technology seems to be more advanced than other races in middle earth. In The Hobbit, Tolkien describes goblins as having dark technology. In the chapter "Over Hill and Under Hill" Tolkien states, "It is not unlikely that they invented some of the machines that have since troubled the world, especially the ingenious devices for killing large numbers of people at once, for wheels and engines and explosives always delighted them." 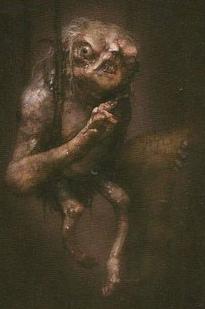 In The Hobbit, Tolkien describes Orcs as a large variety of goblins, leading some to the notion that mountain goblins were of smaller build than Orcs, although the Great Goblin and "Azog the Goblin" (as he was called in The Hobbit) were massive in size.

In popular parlance, perhaps because the word goblins was used in The Hobbit (which was in many ways essentially a children's book) whereas orcs came across as more fearsome in Tolkien's later works, it has become common for many to distinguish goblins as different from orcs: smaller and less fearsome, and less socially evolved. This idea has gained currency through its widespread adoption in various adaptations of Tolkien's stories, as well as in many derivative fantasy worlds, including novels, movies, and games such as Dungeons & Dragons.

The animated Goblins appearing in this film are large, putrid green, bestial creatures. They are far bulkier than what one normally expects for a Goblin, being either hugely muscular or fat. They also had bulbous toad-like heads featuring tusks, lupine ears, canine-like noses, and even horns.

This 1980 animated film attempted to explain to viewers the identification of goblins with orcs. Early in the movie, Sam is heard thinking, "Orcs in the tower. Old Bilbo called them goblins. Whatever the name, I loathe the vile creatures." The Goblins/Orcs in this film use much the same design as those seen in The Hobbit, but with more variations in shape and size, and a more bluish skin tone.

In Peter Jackson's film The Fellowship of the Ring (2001), Goblins have overrun the dwarven colony in Moria long before the events of the movie. When the Fellowship passes through the abandoned Dwarf city of Dwarrowdelf, Pippin accidentally alerts the Goblins to their presence, causing a fight to break out in Balin's Tomb. In this instance, their main weapon appears to be a Cave Troll, which has to be brought down by the whole Fellowship, but the entire force is wiped out by the end of the battle.

However, the skirmish allows a much larger force of Goblins to close in on the Fellowship, who flee to the Bridge of Khazad-dûm. Unfortunately for them, even more Goblins intercept them in one of Dwarrowdelf's great halls, emerging from cracks in the floor and holes in the ceiling to aid their comrades. Trapped in a sea of Goblins, the Fellowship could only prepare for death, but the evil creatures suddenly paused as a menacing roar echoed in the distance. As a distant hall lit with a fiery orange glow, the Goblins inexplicably fled in all directions, leaving the Fellowship to wonder at their fortune — as well as at what was coming next: Durin's Bane. In the book, Orcs are more effective fighters than in the film adaptation. It was an Orc chieftain who stabbed Frodo in the original story, rather than the Cave Troll shown in the movie, and Sam was also injured by another Orc. Haldir tells the Fellowship that Orcs will pursue enemies for long distances, even during the day, to avenge the death of a chieftain.

The Moria Orcs seen in the film seem to be larger and bulkier, towering over dwarves butt smaller than men. The Goblins of the High Pass seen in Peter Jackson's first installment of the Hobbit trilogy are quite different compared to the Orcs of Moria, having flesh-toned skin and riddled with various skin diseases and deformations like harelips, mismatched or skewed eyes, and crooked-growing fingernails. They are overall much more grotesque than Goblins seen in the Lord of the Rings trilogy, being as tall as any Dwarf or Hobbit or some reaching to almost human height or even greater. These types of goblins later appear in The Hobbit: The Battle of the Five Armies as "goblin mercenaries" adorned in armor and some riding War Trolls.

In Peter Jackson's films, being of the same stature as dwarves and hobbits, the goblins are depicted in appearing to lead a much more tribal life compared to the orcs, often having a chief among smaller groups. Compared to orcs, goblins are less organized and use a vast range of scavenged items of clothing, armour and weaponry. They also have a fear of light and the sun and will not step out in daylight most of the time.