The One Wiki to Rule Them All
Register
Don't have an account?
Sign In
Advertisement
in: Articles with unsourced statements, Races, Villains,
and 6 more
English

Giants were a mysterious race living in the Misty Mountains and North Moors of Middle-earth.

The origins of Giants are unknown, as is when exactly they first appeared in Middle-earth; however, it seems that they entered the history of the peoples of Middle-earth in the Third Age.

"All was well, until one day they met a thunderstorm—more than a thunderstorm, a thunder-battle. You know how terrific a really big thunderstorm can be down in the land and in a river-valley; especially at times when two great thunderstorms meet and clash. More terrible still are thunder and lightning in the mountains at night, when storms come up from East and West and make war. The lightning splinters on the peaks, and rocks shiver, and great crashes split the air and go rolling in tumbling into every cave and hollow; and darkness is filled with overwhelming noise and sudden light. Bilbo ... saw that across the valley the stone-giants were out, and were hurling rocks at one another for a game, and catching them, and tossing them down into the darkness where they smashed among the trees far below, or splintered into little bits with a bang ... they could hear the giants guffawing and shouting all over the mountainsides."
—Tolkien, The Hobbit, Chapter IV: "Over Hill and Under Hill"

In The Hobbit, Stone-giants are described as hurling rocks at one another as in a game, during a violent thunderstorm. Their physical form was not described, nor was much else about them.

Gandalf used to tell stories to Bilbo when he was young at parties about dragons, goblins, giants, and rescue of princesses, and the luck of widow's sons. During the riddle game Bilbo thought of all the giants and Ogres he had heard of in tales.

At one point, Bilbo saw a rock in a stream, and wondered if it had been cast miles into the plain by some giant among giants.[1] He also compared being struck like the crash of battering-rams made of forest oaks and swung by giants.[citation needed]

Gandalf later remarked that he would like to find 'a more or less decent giant' to block several of the Orc caves.[2]

In The Lord of the Rings

Giants of the type mentioned in the Red Book of Westmarch are not so much as mentioned in the Lord of the Rings trilogy. It is believed that as Tolkien expanded the Middle-earth cosmology, he simply dropped giants from it.

In some of Tolkien's earliest writings giants were among the Úvanimor, or monster-folk, that were bred in the earth by Melkor (called Melko in the early tales) along with monsters, Nauglath (wicked dwarves), and ogres.

Two giants are given names in The Book of Lost Tales Part Two: Gilim and Nan. In addition some of Tolkien's other material there was Wade (who may be or have been based on a sea-giant of legend) and Noroth, said to be a giant.[3]

During the development of The Hobbit, an early draft described more traditional human-like giants;

However, this was edited to Gandalf telling stories of '...giants and the rescue of princesses' in the final published version.

There may be a loose connection between the giants described in Farmer Giles of Ham and references to generic fairy tale giants mentioned in Hobbit tales. Farmer Giles giants are described as rude and uncultured folk, and troublesome at times, and being as large as elms and stupid.[4] In Tolkien's earliest drafts for The Lord of the Rings, he wrote;

'Trolls and giants were abroad, of a new and more malevolent kind, no longer dull-witted but full of cunning and wizardry.'

In the published editions, the words 'and giants' were removed.

Christopher Tolkien and John Rateliff speculate that some of the various references to giants by J.R.R. Tolkien are inspired by giants from various mythology, such as fire-giants, frost-giants, hill-giants, sea-giants, and storm-giants.

Giants appear in the first of Peter Jackson's The Hobbit: An Unexpected Journey. These stone giants were depicted as fighting each other as well as throwing rocks. They appeared as hewn from stone, and as the size of mountains - indistinguishable from a cliff-face when still. This is somewhat reminiscent of the more tree-like design of the Ents in the previous trilogy, with the giants appearing more inspired by nature than by humanoid appearance.

Tolkien's giants were probably based on the Jotun of Norse mythology, who are similar in strength and bestial.

John Rateliff notes in The History of The Hobbit;

...‘ent’ simply means ‘giant’ in Old English... The Book of Lost Tales had referred to giants as one of the Úvanimor, or monster-folk (BLT I.75), a thoroughly traditional touch on Tolkien’s part; giants have a long, long tradition in folklore of being extremely dangerous if not downright wicked... Ents are one of the five Free Peoples; giants one of those races which may be called the Children of Morgoth... The stone-giants of The Hobbit do not seem to be aware of the presence of the travellers, but then again there’s no indication that they would have behaved any differently had they known; in short, they are portrayed as a perilous but almost impersonal force, rather like the thunder-storm itself... By contrast, a much more traditional view surfaces in the next chapter – when Bilbo is trying to think of the answer to Gollum’s last riddle (‘This thing all things devours’), his mind is filled with ‘all the horrible names of all the giants and ogres he had ever heard told of in tales’ (p. 158). Here we can plainly see the echoes of such traditional tales as ‘Jack and the Beanstalk’ and ‘Jack the Giant Killer’, with their murderous, man-eating giants...Yet not all giants can be such monsters, for a chapter later Bladorthin casually suggests finding ‘a more or less decent giant’ to block up the goblins’ front gate in the mountain pass. It seems, then, that giants occupy a neutral ground, neither good nor evil as a race but varying from individual to individual. Dangerous, certainly – but as Gandalf points out in speaking of Treebeard, powerful and perilous is not the same thing as evil... 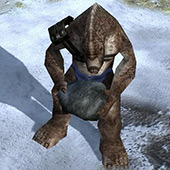 A Mountain Giant in BFME II holding a boulder to throw 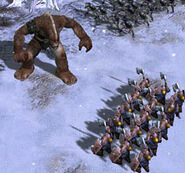